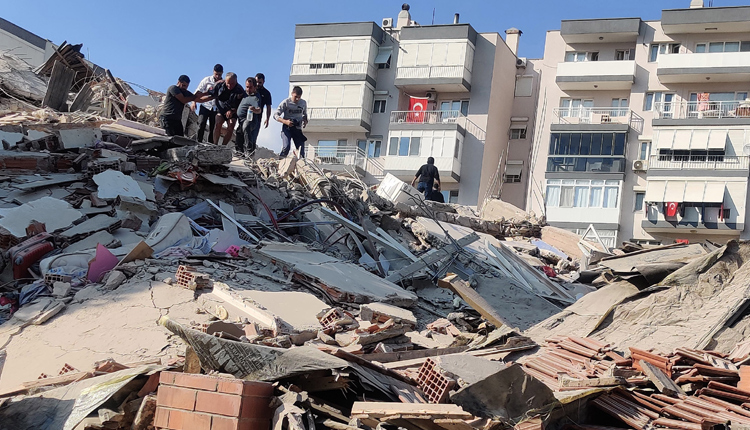 Istanbul: A strong earthquake in the Aegean Sea has shaken Turkey and Greece. Turkey’s interior minister reports that six buildings in western Izmir province were destroyed.

Turkey’s Disaster and Emergency Management Presidency said Friday’s earthquake was centered in the Aegean at a depth of 16,5 kilometers and registered at a 6.6 magnitude.

The European-Mediterranean Seismological Centre said the quake had a preliminary magnitude of 6.9, with an epicenter 13 kilometers north northeast of the Greek island of Samos.

Over 20 Buildings have Collapsed after 6.9 Magnitude Earthquake in #Izmir ,Turkey

And they are going Down pic.twitter.com/4FKw8y9OgN

The United States Geological Survey put the magnitude at 7.0.

Turkish media showed wreckage of a multiple-story building in central Izmir, with people climbing it to reach rescuers. Smoke was filmed in several spots in central Izmir.

The governor said there was no immediate information on casualties.

BREAKING: A #tsunami warning has been issued after an #earthquake with a magnitude of up to 7.0 struck #Turkey‘s #Aegean coast, north of the Greek island of #Samos. Vision has emerged of what’s reportedly tsunami-related flooding in #Seferihisar, south-west of #Izmir #deprem pic.twitter.com/EP9JGDHwkZ

Turkish media said the earthquake was felt across the regions of Aegean and Marmara, where Istanbul is located. Istanbul’s governor said there were no reports of damage.

Another tsunami footage from the earthquake in Izmir province of Turkey.

This one is really dangerous pic.twitter.com/62zfddWSi8

The quake was felt across the eastern Greek islands and even in the Greek capital Athens. Greek media said the residents of Samos and other islands fled their homes, while some rockfalls were reported. There were no immediate reports of injuries.

Later, as reported by AFP news agency, the powerful earthquake killed at least six people and injured over 300 people levelling buildings and creating a sea surge that flooded streets near the Turkish resort city of Izmir.

CNN reported, at least 20 buildings have been damaged in the Turkish city of Izmir, its mayor Tunc Soyer told CNN Turk.

Koraput: Locals Live Under Uncertainty As AP Encroaches Into Odisha