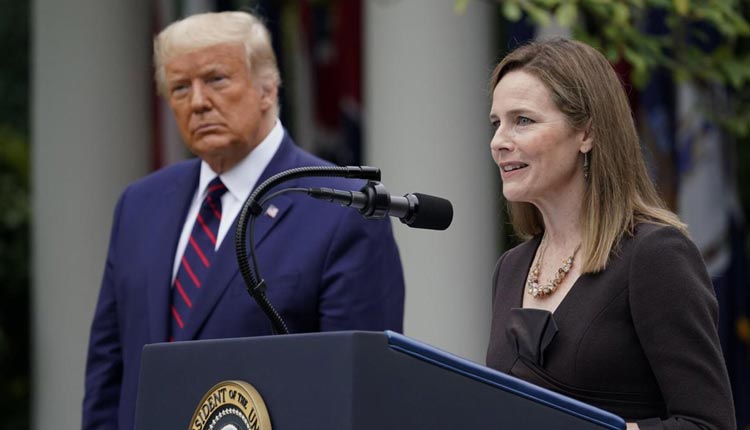 New York: US President Donald Trump’s Supreme Court nomination of Amy Coney Barrett has sailed through the Senate winning a life-time appointment and firming up the conservative hold on the bench.

She received 52 votes of the Republican Party senators on Monday, just eight days before the presidential election, with one defecting to the Democratic side recording 48 votes in opposition.

The nine-member Supreme Court bench will have six conservatives when Barrett joins the bench, three of them nominated by President Donald Trump as his lasting legacy.

Supreme Court Chief Justice John Roberts is scheduled to swear her in as a justice on Tuesday.

Barrett succeeds Democratic President Bill Clinton’s nominee Ruth Bader Ginsburg, who had built up a record of liberal verdicts, whether they held or were outvoted. She died at age 87 in September after a 27-year career on the bench.

Barrett, a mother of seven, two of them of African descent adopted from Haiti, is only 48 years old with the possibility of a long stint on the nation’s highest court.

Democrats had opposed the appointment of Barrett so close to the election citing the Republicans scuttling former President Barack Obama’s nomination of Merrick Garland to the Supreme Court in an election year claiming that it should be the prerogative of the new president.

The Democratic Party’s vice-presidential nominee Kamala Harris, a member of the Senate who voted against Barrett, tweeted that the confirmation was “an illegitimate process” which “we won’t forget”.

The Republican Senate majority leader Mitch McConnell flipped from his 2016 stand this time asserting the legal right of the sitting president to make nominations and for the Senate to approve it.

“By any objective standard, Judge Barrett deserves to be confirmed to the Supreme Court. The American people agree,” McConnell said before the vote.

Democrats have suggested enlarging the size of the court and adding more judges should their nominee Joe Biden win the presidential election to reverse the conservative dominance.

Biden, who has not quite affirmed either way, has said that he would appoint a commission to look into the issue.

One of the worrisome factors for the Democrats is that court may be called on to resolve cases involving the November 3 election as it had in the close election in 2000 in which Republican George W. Bush was declared the winner over Democrat Al Gore despite polling fewer popular votes.

The court refused to get involved in a Florida court decision that helped Bush get the electoral college votes to get the presidency.

The Supreme Court is likely to rule on issues important to the Democrats like continuing with nation-wide legalisation of abortion, the future of the national health insurance programme introduced by Obama, and various immigration issues.

Vice President Mike Pence, who is the president of the Senate, stayed away. He has been exposed to Covid-19 by his chief of staff Marc Short who tested positive for coronavirus along with at least four other staffers.

Democrats said he should not come to the chamber warning that his “presence alone could be very dangerous to many people”.