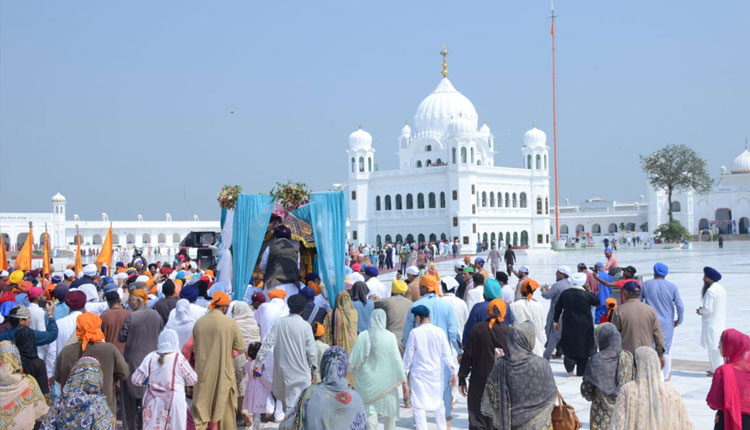 Islamabad: The Pakistan government has sent out invitations to Indian Sikhs to attend celebrations marking the 551st birth anniversary of Guru Nanak, the founder of Sikhism.

As per the details of the invitation, sent in advance via the Indian Sikh Sangats, the devotees will be offered a five-day visa to enter Pakistan after a mandatory Covid-19 test.

“All pilgrims coming to partake in the festivities of Baba Guru Nanak Dev’s birth anniversary will required to observe and abide by all Covid-19 SOPs throughout their stay, even after showing the mandatory negative Covid-19 test,” an official of the Abandoned Waqf Property Board said.

The country’s Waqf board and the Pakistan Sikh Gurdwara Parbandhak Committee have also sent regular invitations and itineraries to various other Sikh societies including the Shiromani Committee of India, inviting them to the festivities.

Due to the ongoing Covid-19 pandemic, Indian Sikhs will be allowed to stay in Pakistan only for a limited period of time, without any extensions.

A three-day celebration known as Guru Nanak Gurpurab will begin on November 27 at the Nankana Sahib, with celebrations continuing throughout the month.

“The stay of Indian Sikhs in Pakistan had to be revised in consideration of closed borders and rising coronavirus tally in India,” said Sardar Satwant Singh, head of Pakistan Sikh Gurdwara Prabandhak Committee.

“There will be no new restrictions placed on the number of Indian Sikh pilgrims making the journey.”

However, as per bilateral agreement between India and Pakistan, 3,000 Indian Sikh pilgrims will be allowed entry into Pakistan, specifically for the Gurdwara celebrations.

However, the pilgrims will be restricted to Nankana Sahib only, unlike before when they were provided with an option of a 10-day vista to visit multiple gurdwaras in Lahore, Nankana Sahib, Hasan Abdal, Kartarpura, Rohri Sahib and Farooqabad.

For the first time, the pilgrims will also not have the option to stay or shop in Lahore.

“Indian pilgrims will be welcomed at the Wagah border on November 27, from where they will be shuttled to Nankana Sahib through a special bus service,” said Sawant Singh.

“The pilgrims will have access to various gurdwaras in Nankana Sahib and also participate in the Nagar Kirtan custom,” he added.

It has also been reported that certain Sikh societies including Shiromani Committee in India, have called on the Indian government to open the Kartarpur Corridor of India for Guru Nanak’s birth anniversary.

Sources reveal that Pakistan has expressed its willingness to promote religious tourism in the country.

However, no response has been received from the Indian government on the matter.