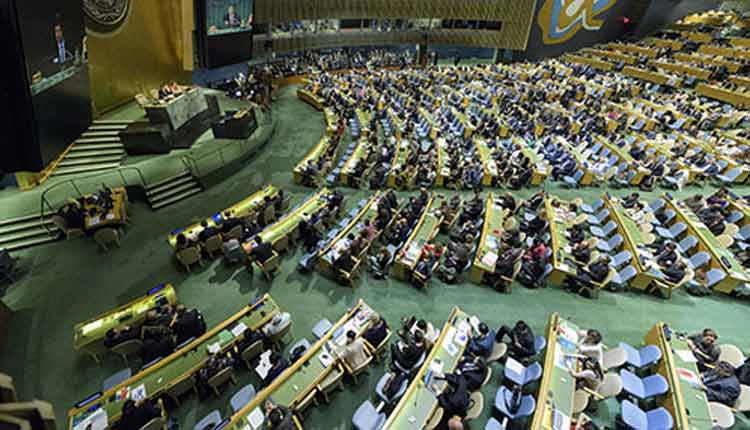 United Nations: The landmark 75th session of the United Nations General Assembly has commenced amidst the devastating coronavirus pandemic, with the world leaders set to meet virtually for the first time in the UN’s 75-year history for the annual high-level session as they confront some of the most serious threats facing humanity.

Due to the coronavirus pandemic, which has infected over 29 million people and killed more than 931,000 globally, the landmark 75th year of the UN will be marked like no other in the history of the world organisation.

Heads of states and governments, ministers and diplomats from UN member states will not gather in New York for the busiest time of the year in the world organisation’s calendar due to the pandemic.

The world leaders will submit pre-recorded video statements for the high-level meetings and summits, the first time in the UN’s history that the high-level week is being held largely virtually.

UN Secretary-General Antonio Guterres, addressing the opening of the UNGA session, said that the year will be a critical one in the life of the United Nations as countries must continue to respond to the immediate impact of the COVID-19 pandemic by strengthening health systems and supporting the development and equitable distribution of treatments and vaccines.

The last seven months have been extremely difficult for the people we serve, and for many of us, personally and professionally. The COVID-19 pandemic has cut a swathe through our lives and our communities. We are all dealing with high levels of uncertainty; right now, we are still in the middle of the fog, Guterres said.

The UN chief said that the extent of the pandemic, its social and economic impact, and its interaction with other global challenges and megatrends, is unknowable and our only hope is to respond with unity and solidarity, while supporting the most vulnerable.

Noting that a virtual participation at this year’s UNGA session may mean that a record number of heads of states and governments take part in the high-level week, Guterres said that going online will undoubtedly create new challenges.

We will need to learn as we go and continue to demonstrate the greatest flexibility, he said.

UNGA President Bozkir, however, noted the importance of meeting in person, so long as health conditions allow , and affirmed his intention to convene face-to-face meetings as much as possible.

While taking mitigation measures needed to protect the health and safety of delegates and staff, he said that in the “business of diplomacy, there is no substitute to meeting counterparts face-to-face, to build long-term understanding of each other’s positions and forge compromise .

Bozkir told the plenary that the general debate would be addressed by more heads of state than ever before, given that most will be able to send in pre-recorded video statements.

He asserted that two weeks of crucial high-level meetings, will guide our work for the session and expressed confidence that their impact will not be compromised by the circumstances.

The UN chief urged that nations must prepare to build a strong recovery, based on the 2030 Agenda and the Paris Agreement.

The high-level meeting of the General Assembly to commemorate the 75th anniversary of the United Nations will take place on September 21. Prime Minister Narendra Modi is likely to address the session through a pre-recorded statement on September 26, according to a provisional list of speakers issued by the UN.

The General Debate of the 75th session of the Assembly will commence from September 22 and run till September 29.

While US President Donald Trump may travel to New York to address the General Debate on the opening day, others will address the high-level week through pre-recorded video statements submitted to the UN in advance.

Brazilian President Jair Bolsonaro is listed as the first speaker for the General Debate. The US is traditionally the second speaker on the opening day of the General Debate and if Trump travels to New York, he would be delivering the final address of his presidency’s first term in-person.

Along with the General Debate and 75th anniversary commemoration, key high-level sessions will also be held virtually at the UN.

The Summit on Biodiversity will be held on September 30, high-level meeting of the General Assembly on the 25th anniversary of the Fourth World Conference on Women on October 1 and the high-level meeting to commemorate and promote the International Day for the Total Elimination of Nuclear Weapons on October 2.

Member states will submit their pre-recorded video statements for these high-level meetings as well. Each country would be encouraged to observe the time limit of 15 minutes in the General Debate that would include remarks in the Assembly Hall to introduce the pre-recorded video and the video itself.

School Student Including Two Killed In Accident At Baripada, 6 Injured