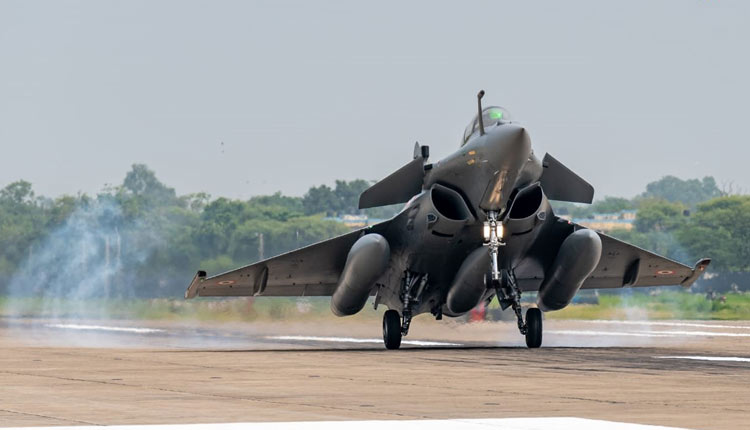 Islamabad: India’s acquisition of five of the 36 medium multi-role Rafale fighter jets built by French aircraft manufacturer Dassault, which arrived at the IAF airbase in Ambala near New Delhi on Wednesday to upgrade its air force, has irked Islamabad.

“The world community must dissuade India from its disproportionate arms build-up, which could also lead to an arms race in South Asia,” said Farooqui.

Expressing serious concerns over the Rafale acquisition by India, Farooqui raised the concern over New Delhi’s “continued intentions to expand and modernise its nuclear arsenal”.

“It is well known that India continues to expand and modernise its nuclear arsenal both in terms of type and number of delivery systems. India has nuclearised the Indian Ocean and continues to increase the readiness of its arsenal through measures such as canisterisation of missile systems,” Farooqui said.

“It is disturbing to note that India continues to amass military capabilities beyond its genuine security requirement. According to credible and reputable international research institutes, India is now the second-largest arms importer in the world,” added Farooqui.

India’s up-gradation of arms has certainly spread uneasiness in Pakistan amid a surge in deadly exchanges of gunfire and confrontation along the troubled Line of Control (LoC).

Pakistan has been urging the international community to take notice of what it calls “India’s massive arms build-up” along with its “offensive security doctrine and force posture”, which Islamabad says is adversely affecting the strategic stability of South Asia.

“The arms build-up is being aided and abetted through a policy of exemptions, waivers and supply of advanced equipment, technology and weapons for narrow commercial interests. Such arms transfers also violate the objectives of various export control regimes on preventing the destabilising accumulation of arms in various regions, including where outstanding conflicts and disputes exist,” said Farooqui.

“Transfer of advanced systems, where there is an open intention of conversion into nuclear delivery platforms, calls into question the commitment of international suppliers to non-proliferation commitments,” she added.

While Islamabad’s position on India’s acquisition of Rafale combat aircraft is filled with concerns and reservations, Pakistan has reiterated that it remains opposed to any arms race in the region, saying it cannot remain oblivious to such developments.

“Pakistan cannot remain oblivious to these developments and remains confident of its ability to thwart any ill-considered act of aggression,” said Farooqui.