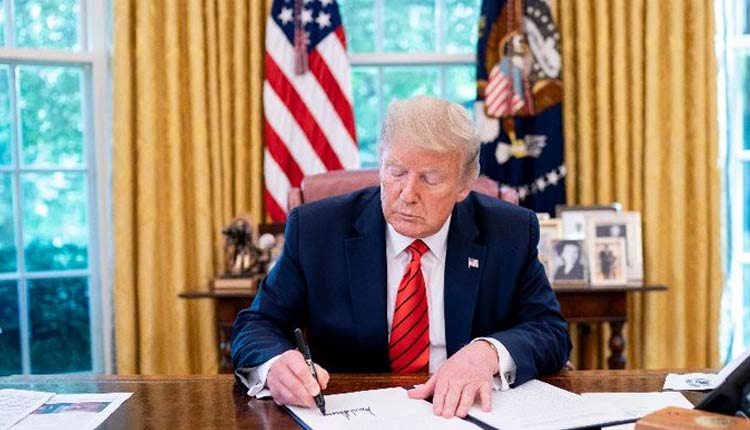 New York: US President Donald Trump is suspending several categories of work visas, including the H-1B prized by Indian professionals, till the end of the year, according to White House officials.

The restrictions will not affect those already in the US on the H-1B and the other work visa categories being put on pause, officials said on Monday.

A senior official who briefed the media linked the freeze to the high unemployment level in the US because of the COVID-19 blow to the economy.

When Trump imposed a 60-day pause on permanent immigrant visas or green cards on April 22, the H-1B temporary work visas, which are now affected, escaped the freeze.

The green card restrictions, which do not apply to spouses and children of immigrants, will now continue until the end of the year.

Indians are the single largest group of H1-B visa-holders accounting for nearly 74 per cent of the work visas.

The official said that newly announced freeze of the H-1B, H-2B, H-4, L-1 and J-1 visas would help workers already in the country get access to more than 500,000 jobs.

However, those in the healthcare field and those considered important for national security will continue to receive visas.

The official said that Trump had also asked his staff to look at a long-term plan for revamping the US immigration system to make it merit-based unlike the current programmes for green cards that benefit the extended families of immigrants.

The COVID-19 pandemic has become a handy excuse for Trump’s longtime intent to restrict immigration, a demand of a part of his base as well as of some in the Democratic Party who have reservations about the impact of immigration on wages.

The economic disruption caused by the pandemic has led to a groundswell of opposition among Americans to immigration with various polls showing more than two-thirds supporting restrictions.

On the other hand, US businesses — particularly in the Silicon Valley — have opposed restrictions on the visas and asserted that they would, in fact, affect the nation’s economy, where immigrants and those on work visas have disproportionately been founders of companies, besides holding up America’s global leadership in technology.

The Indian government considers restrictions on H-1B an important issue and External Affairs Minister S Jaishankar said in December that he had told US officials that the visas “should not be obstructed” or “unreasonable legislative provisions should not constrain” them.

While most technologists and engineers would be temporarily barred, exemptions are made for seasonal agricultural workers and nannies.

H-2B visas are for non-professional workers. An exemption would be made for agricultural labour in this category on whom the US food supply depends, the official said.

Similarly, in the J-1 category nannies or au pairs — who are employed by the elite across the political spectrum — would be exempt, while it would apply to scholars and researchers except those in certain health or specialised fields or to professors.

The H-4 visas are for spouses of H-1B workers and the restrictions are linked.

Employees transferred by their companies to work in the US are given L-1 visas.

Under new rules announced on Monday by the immigration service, asylum applicants cannot apply for work authorisation for a year.

50,000 Made In India Ventilator Under PM CARES Fund To Fight COVID-19