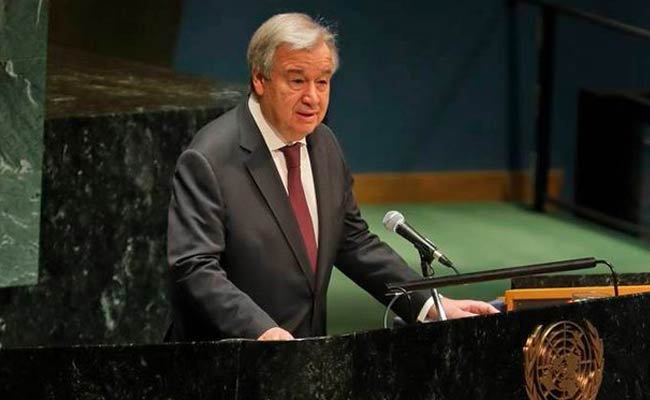 “The engagement of the Security Council will be critical to mitigate the peace and security implications of the COVID-19 pandemic,” he told the council in a virtual briefing on Thursday, reported Xinhua news agency.

“Indeed, a signal of unity and resolve from the council would count for a lot at this anxious time.”

To prevail against the pandemic, the world will need to work together. That means heightened solidarity, and it means having the necessary resources, said Guterres.

The financial situation of the United Nations remains perilous, and it has only enough cash to fund peacekeeping operations through the end of June and no capacity to pay troop- and police-contributing countries, he said.

While COVID-19 is first and foremost a health crisis, its implications are much more far-reaching, he warned.

“We are already seeing its ruinous social and economic impacts, as governments around the world struggle to find the most effective responses to rising unemployment and the economic downturn. But the pandemic also poses a significant threat to the maintenance of international peace and security — potentially leading to an increase in social unrest and violence that would greatly undermine our ability to fight the disease.”

In his briefing through video teleconference, Guterres reminded the Security Council of eight concerns that come under its purview: the maintenance of international peace and security.

First, the pandemic threatens to further erode trust in public institutions, particularly if citizens perceive that their authorities mishandled the response or are not transparent on the scope of the crisis.

Second, the economic fallout of this crisis could create major stressors, particularly in fragile societies, less developed countries and those in transition. Economic instability will have particularly devastating impacts for women, who make up the vast majority of those sectors worst affected. The large numbers of female-headed households in conflict-settings are especially vulnerable to economic shocks.

Third, the postponement of elections or referenda, or the decision to proceed with a vote — even with mitigation measures — can create political tensions and undermine legitimacy. Such decisions are best made following broad consultation aimed at consensus. This is not a time for political opportunism.

Fourth, in some conflict settings, the uncertainty created by the pandemic may create incentives for some actors to promote further division and turmoil. This could lead to an escalation of violence and possibly devastating miscalculations, which could further entrench ongoing wars and complicate efforts to fight the pandemic.

Fifth, the threat of terrorism remains alive. Terrorist groups may see a window of opportunity to strike while the attention of most governments is turned toward the pandemic.

Sixth, the weaknesses and lack of preparedness exposed by this pandemic provide a window onto how a bioterrorist attack might unfold and may increase its risks. Non-state groups could gain access to virulent strains that could pose similar devastation to societies around the globe.

Seventh, the crisis has hindered international, regional and national conflict resolution efforts, exactly when they are needed most. Many peace processes have stalled as the world responds to COVID-19. Restrictions on movement may continue to affect the work of various confidence-based mechanisms, as well as the ability to engage in crisis diplomacy to de-escalate potential conflicts.

Eighth, the pandemic is triggering or exacerbating various human rights challenges. “We are seeing stigma, hate speech, and white supremacists and other extremists seeking to exploit the situation. We are witnessing discrimination in accessing health services. Refugees and internally displaced persons are particularly vulnerable. And there are growing manifestations of authoritarianism, including limits on the media, civic space and freedom of expression.”

The world faces its gravest test since the founding of the United Nations, said, Guterres.

The world is struggling to absorb the unfolding shock: the jobs that have disappeared and businesses that have suffered; the fundamental and drastic shift to daily lives, and the fear that the worst is still yet to come, especially in the developing world and countries already battered by armed conflict.

“This is the fight of a generation, and the raison d’etre of the United Nations itself,” he told the Security Council.

COVID-19 fatality rate to be 10 times higher than influenza: WHO chief

The fatality rate of COVID-19 is estimated to be 10 times higher than influenza, the World Health Organization (WHO) Director-General Tedros Adhanom Ghebreyesus said.

Speaking at a Mission briefing on COVID-19 from Geneva on Thursday, the WHO chief said that so far, more than 1.3 million people have been infected, and almost 80,000 people have lost their lives, reported Xinhua news agency.

“This pandemic is much more than a health crisis. It requires a whole-of-government and whole-of-society response,” he said.

He added that the world is yet to see the devastation it could wreak in poorer and more vulnerable countries. Without help and action now, poor countries and vulnerable communities could suffer massive devastation.

“The window for containing the virus at the sub-national and national level is closing in many countries. The infection numbers in Africa are relatively small now, but they are growing fast,” he warned.

“As I said in the press conference yesterday, we must quarantine politicizing this virus at national and global levels. We have to work together, and we have no time to waste,” he added.

COVID-19: US starts clinical trial of HCQ for coronavirus treatment