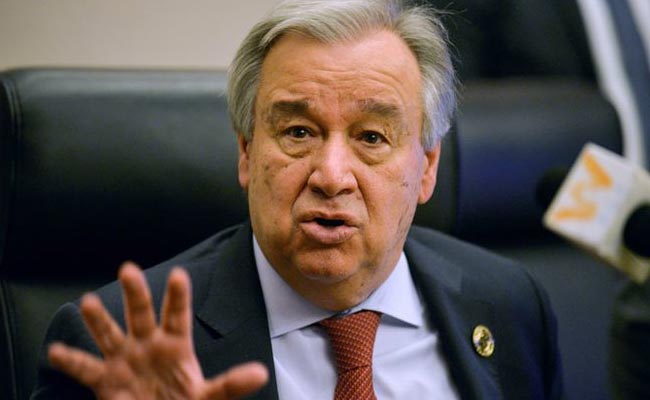 United Nations: UN Secretary-General Antonio Guterres has warned that the world faces the most challenging crisis since World War II, confronting a pandemic threatening people in every country, one that will bring a recession “that probably has no parallel in the recent past.”

There is also a risk that the combination of the disease and its economic impact will contribute to “enhanced instability, enhanced unrest, and enhanced conflict,” the UN chief said at the launch of a report on the socioeconomic impacts of COVID-19 on Tuesday.

Guterres called for a much stronger and more effective global response to the coronavirus pandemic and to the social and economic devastation that COVID-19 is causing.

He stressed that this will only be possible if everybody comes together and if we forget political games and understand that it is humankind that is at stake.

“We are facing a global health crisis unlike any in the 75-year history of the United Nations one that is killing people, spreading human suffering, and upending people’s lives, the report said.

“But this is much more than a health crisis. It is a human crisis. The coronavirus disease (COVID-19) is attacking societies at their core.

The secretary-general told reporters: The magnitude of the response must match the scale of the crisis large-scale, coordinated and comprehensive, with country and international responses being guided by the World Health Organization.

He stressed that we are still very far from where we need to be to effectively fight the COVID-19 worldwide and to be able to tackle the negative impacts on the global economy and the global societies. First, he said, many countries are not respecting WHO guidelines, with each tending to go its own way in dealing with the pandemic.

“Let us remember that we are only as strong as the weakest health system in our interconnected world, he said. It is essential that developed countries immediately assist those less developed to bolster their health systems and their response capacity to stop transmission.

Secondly, he said, while USD 5 trillion has been mobilised, most of that money was by the developed world including USD 2 trillion in the United States to support their own economies from the consequences of the pandemic.

We are far from having a global package to help the developing world to create the conditions both to suppress the disease and to address the dramatic consequences in their populations, in the people that lost their jobs, the small companies that are operating and risk to disappear, those that live with the informal economy that now have no chance to survive, he said.

Massive support to the developing world is still required. The report also cites International Labor Organization estimates for 2020 that between 5 million and 25 million jobs will be lost, with a corresponding loss of between USD 860 million and USD 3.4 trillion in labor income. It also cited an estimate by the U.N. trade and development organization UNCTAD of a 30-40 percent downward pressure” on global foreign direct investment flows this year.

Guterres announced the establishment of a COVID-19 Response and Recovery Fund to support efforts in low- and middle-income countries, with the aim of swiftly enabling governments to tackle the crisis and promote recovery.

He expressed hope that there will be a positive response from the international community to help vulnerable people including the tens of millions of refugees and internally displaced people, those in the slums of big cities in the global south, and poor people in middle-income countries who are more numerous than in the least developed countries.

The secretary-general said developed countries must massively increase the resources available to the developing world by expanding the capacity of the IMF to issue special drawing rights, and enabling other international financial institutions to rapidly inject resources into countries that need them.

Guterres said he strongly supports an idea from French President Emmanuel Macron, Russian President Vladimir Putin and German Chancellor Angela Merkel at last week’s summit of the Group of 20 major industrialised nations that there should be a G20 initiative to help Africa.

But, again, we must act quickly to make it happen, he said. If not, the African continent will have enormous difficulties in facing this challenge.