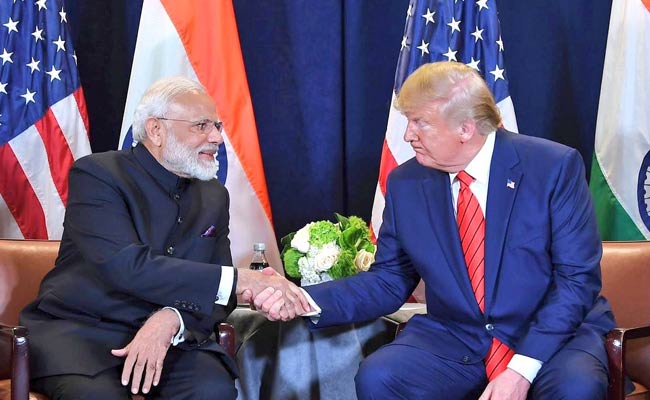 Washington: President Donald Trump has said that he has requested Prime Minister Narendra Modi to release the amount of Hydroxychloroquine ordered by the United States after India last month banned the drugs for exports.

Trump said that he spoke to Prime Minister Modi on Saturday morning and made a request to release Hydroxycholoroquine for the US.

“I called Prime Minister Modi of India this morning. They make large amounts of Hydroxychloroquine. India is giving it a serious consideration,” Trump said at his daily news conference at the White House on Saturday.

India’s Directorate General of Foreign Trade on March 25 banned the export of Hydroxychloroquine but said that certain shipments on humanitarian grounds may be allowed on a case-by-case basis.

With more than three lakh confirmed cases of coronavirus infection and over 8,000 fatalities, the US has emerged as the worst sufferers of the deadly coronavirus diseases to which there has been no cure.

Scientists across the world in particular in the US are racing against time to find either a vaccine or a therapeutic cure to the virus that has so far killed more than 64,000 people and infected 1.2 million in more than 150 countries.

Based on some initial results, the Trump administration is banking heavily on using Hydroxychloroquine, a decades old malaria drug, for the successful treatment of coronavirus.

Following a quick provisional approval from the US Food and Drug Administration last Saturday, the malaria drug along with a combination of some other drug is being used in the treatment of about 1,500 COVID-19 patients in New York.

According to Trump, the drug is yielding positive results. If successful, he told reporters that it would be a gift from heaven.

In the next several weeks, health experts in the US has projected between 100,000 to 200,000 deaths due to coronavirus, which due to human-to-human transmission is spreading like a wildfire in the US.

In anticipation of it being a successful drug in the treatment of coronavirus, the US has already stockpiled some 29 million doses.

It is in this context Trump requested Modi to help US get millions of doses of Hydroxychloroquine, a malaria drug that can be produced at mass scale in India.

Trump said he would appreciate if India releases the amount of Hydroxychloroquine that the US has ordered.

“And I said I would appreciate if they (India) would release the amounts that we ordered, he said, without mentioning that quantity of Hydroxychloroquine that has been ordered by US companies from India.

The Trump administration has made Hydroxychloroquine as part of its Strategic National Stockpile.

Trump said that people in malaria affected-countries take Hydroxychloroquine and not many people are infected by coronavirus.

Trump said that he would take Hydroxychloroquine, if needed.

“I think people should if it were me, in fact, I might do it anyway. I may take it, Ok? I may take it. And, I’ll have to ask my doctors about that, but I may take it, he said in response to a question.

Don’t use alcohol-based hand sanitisers before lighting diyas or candles on April 5: Centre