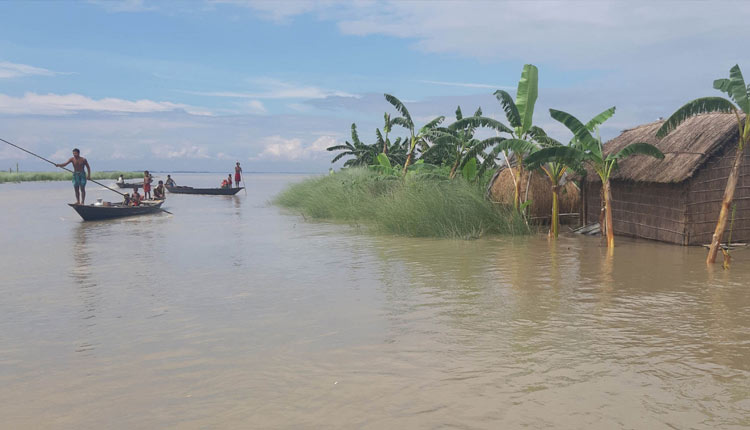 Dhaka: Almost half of Bangladesh remained in the grip of floods on Monday, which have also claimed the lives of 119 people.

According to the daily flood situation report of the country’s disaster response coordination center, the victims were reported in 21 (out of 64) districts since June 30, reports Xinhua news agency.

Of the victims, 96 people died of drowning, 13 of snakebites, eight of lightning, and one of diarrhoea.

According to the government’s another daily disaster situation report prepared by the country’s National Disaster Response Coordination Center (NDRCC) under the Ministry of Disaster Management and Relief, the floods have affected nearly 5 million people and displaced hundreds of thousands of families.

TV reports showed wide areas of land are underwater in parts of Bangladesh as major rivers overflowed since last week.

Officials said the onrush of water from hills across the Indian borders has virtually worsened the situation in the country.

State Minister for Disaster Management and Relief Md Enamur Rahman said they had rushed teams of disaster response forces to carry out the rescue, distribute relief materials and supervise centres where the flood-affected families have taken shelter.

Prime Minister Sheikh Hasina has asked officials to remain alert to tackle floods which come as a further blow at a time when the country is feeling the severe pinch of the COVID-19 pandemic.

36 Million In India To Face Threat Of Annual Floods By 2050: Study