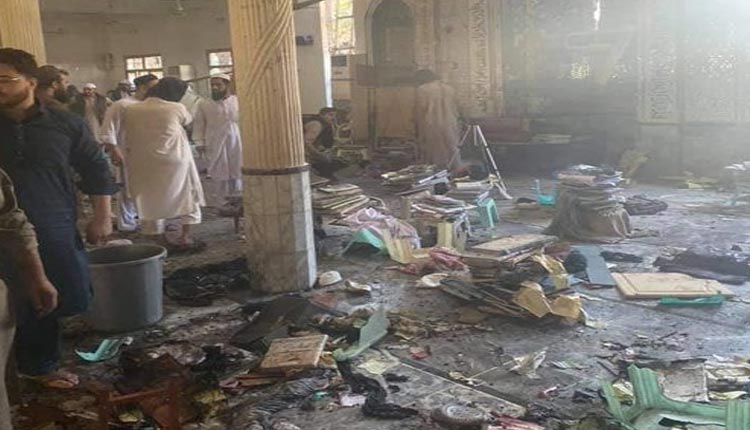 The blast occurred at the seminary in Dir Colony in interior Peshawar city after Fajr (morning) prayers. A bag filled with explosive materials was kept close to wall of the seminary by some unknown person which went off, killing 7 children and injuring 70 others, superintendent of police in Peshawar city Waqar Azeem said.

He said the bag is believed to have had an IED device that went off when the children started filling in the seminary.

The hospital authorities confirmed that they received seven dead bodies and 70 people injured in the blast.

There was a general threat alert in the Peshawar district, said Khyber Pakhtunkhwa police chief Sanaullah Abbasi, who also confirmed the death toll.

According to police, around 40-50 children were present inside the seminary when the bomb went off.

The seminary’s administration said around 1,100 students study at the institution.

Chief Minister’s Advisor on Information Kamran Bangash said that the blast would be fully probed and the perpetrators will be brought to book.

“Those who spread terror will never succeed in their mission,” he added.

The area has been cordoned off and police teams are collecting evidence.

No group has claimed responsibility for the attack.

Khyber Pakhtunkhwa Health Minister Taimur Saleem Jhagra visited the site of the blast. Speaking to reporters, he said that the focus was on providing the injured the best possible treatment to increase their chances of recovery.

“Just back from a quick visit to Lady Reading Hospital, following the blast at a Madrassa in Dir Colony, Peshawar. Talked to the Chief Secretary, CCPO and the DC, as well as hospital administration. LRH has received 70 injured, with 7 patients dead on arrival,” he said in a tweet.

“The damage inflicted to students is extremely saddening. There is no compensation for the mothers who have lost their children,” she said.

Last month, five people were killed and two others injured in a blast in the Akbarpura area of Nowshera, Khyber Pakhtunkhwa.

Here Are Some of The Disturbing Visuals Of The Incident.

4 killed including children, 19 injured in a an explosion in a religious school for children in #Peshawar. pic.twitter.com/w2fSmvHgzD