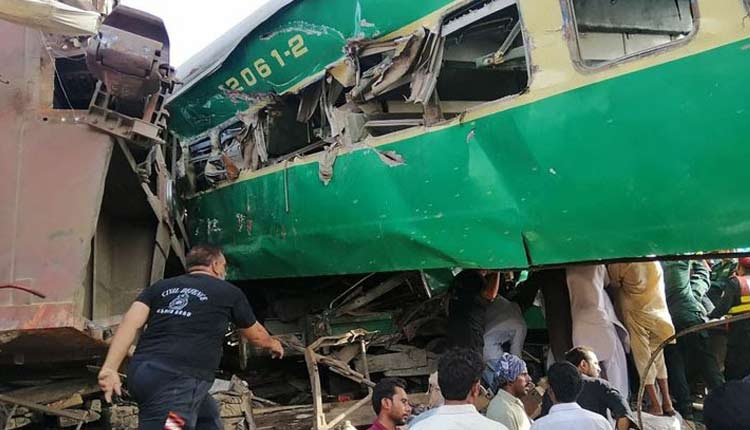 Lahore: At least 20 Sikh pilgrims were killed and many others critically injured in a collision between a passenger bus and train on Friday in Pakistan’s Sheikhupura district, near Lahore.

As per details, the Shah Hussain Express train smashed into the bus carrying at least 25 Sikh pilgrims from Nankana Sahib to Lahore, after it came on the rail tracks and got stuck.

A Pakistan Railways spokesperson said that the collision occurred at a railway crossing located between Farooqabad and Bahali Wala.

It was reported that the Sikh devotees were travelling from Gurdwara Sacha Sauda from Peshawar, while the train was enroute to Lahore from Karachi.

Hospital authorities confirmed that there were at least 60 injured being treated, adding that most of them were in critical condition.

Prime Minister Imran Khan expressed grief at the incident and ordered the best possible medical facilities to the victims.

Railway Minister Sheikh Rasheed Ahmed has ordered an immediate inquiry into the incident.

As per eyewitnesses, the railway crossing did not have any barriers to stop the traffic and keep the train tracks clear.

“The bus was stuck on the train track and was hit hard by the train. The train dragged the vehicle to a good distance. Then the vehicle exploded,” said an eyewitness.

“Pained by the tragic demise of Sikh pilgrims in Pakistan. My thoughts are with their families and friends in this hour of grief,” he tweeted.

Pained by the tragic demise of Sikh pilgrims in Pakistan. My thoughts are with their families and friends in this hour of grief.

I pray that those pilgrims injured recover at the earliest.

The Prime Minister said that he will pray that that injured recover at the earliest.

The Sikh devotees were travelling from a gurdwara in Lahore to Peshawar in the bus when it was hit by the train en route to Lahore from Karachi.

Hospital authorities said most of the around 60 injured were in critical condition.