Netizens are shocked to see the cost of dishes in a restaurant as nowadays we can’t even afford a water bottle at that price.

As Indians, we love to eat and this love for food is well documented as we have many restaurants and hotels from the pre-Independence era also. However, over the years the food quality and costs have increased by manifold.

Recently, a 37-year-old restaurant bill went viral on social media due to the cost of food items.

Netizens are shocked to see the cost of dishes in a restaurant as nowadays we can’t even afford a water bottle at the price at which they were selling a full meal including the service tax.

From the yellow-coloured bill, which is going viral on social media, it can be seen that the bill is from the year 1985. The bill also contains the items ordered and their selling price.

Shahi paneer, dal makhani, raita, and 9 rotis were ordered on the bill. According to the bill, the cost of one plate of Sahi paneer was just Rs 8 at that time while Daal Makhani and Raita were available for just R 5. Similarly, the cost of 9 Rotis was Rs 6.30 which means the cost of one roti was just 70 paise. 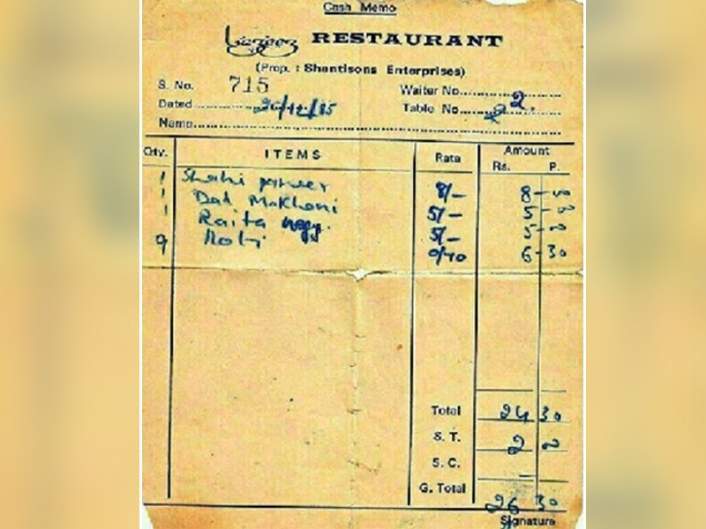 The total bill was Rs 24.30 paise however an extra Rs 2 was charged as service tax like our GST nowadays. Som, the bill inculing service tax was 26.30.

As soon as this bill surfaced on the internet, it went viral with people comparing it with today's price while some netizens couldn’t believe that once paneer dish was only available for Rs 8. As nowadays if one goes to a decent restaurant for a dinner, the minimum bill is usually over Rs 300.