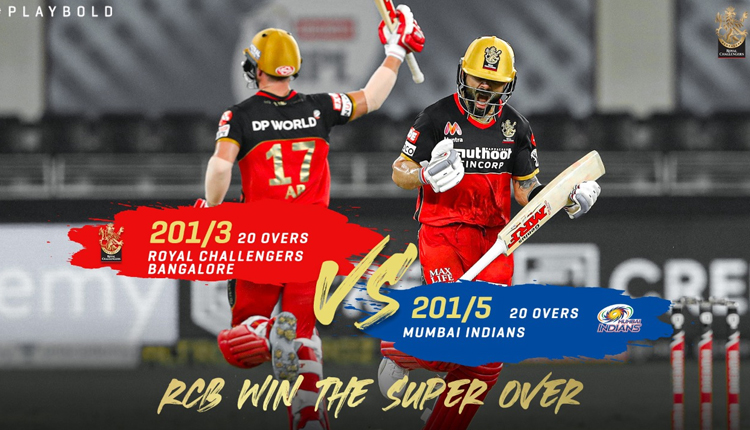 Dubai: Royal Challengers Bangalore (RCB) captain Virat Kohli slammed a boundary off the last ball of the Super Over tie-breaker to register a thrilling win over reigning champions Mumbai Indians after the scores were tied in the normal course of the 10th match of the IPL here on Monday.

After both teams scored the exact number of runs in 20 overs/innings — RCB made 201/3 batting first, and MI 201/5 — the match went into the Super Over.

In the Super Over, in which Mumbai Indians batted first, Navdeep Saini bowled a disciplined line and length and conceded only seven runs, before Kohli and AB de Villiers scored the required runs off pacer Jasprit Bumrah to win two points for RCB.

The Super Over win over reigning champions Mumbai Indians (MI) should give us a big boost, going forward in the IPL, said Royal Challengers Bangalore (RCB) captain Virat Kohli after the edge-of-the-seat thriller here on Monday.

Rohit Sharma, captain of the losing team, said his Mumbai Indians would take “a lot of positives” from this game played at the Dubai International Cricket Stadium.

“I don’t have words right now. It was such a roller-coaster game. I think they played really well and patiently in the middle. It went down to the wire; we tried to execute the things we wanted to. We’ve got a close victory and these little things on the field…we really want to focus on it,” said Kohli after the game.

“I thought about who are the best guys to come back for twos and it was me and AB. It was all about stepping onto the field and taking responsibility. Fielding is something we need to work on. If we’d taken our chances, it wouldn’t have been so close,” he said.

Kohli was happy with the character his players showed.

“It was a good match-up against Jasprit. Top quality cricket and games like these, people would love to watch. The changes that we made, make Washi (Washington Sundar) bowl in the power-play paid off. Gurkeerat didn’t get a chance to bat. The guys showed good character. Outstanding Super Over from him (Navdeep Saini). He used the yorkers and wide balls to good effect. This should boost us going forward,” said the RCB captain.

Rohit Sharma lauded Ishan Kishan, whose 99 went in vain, and Kieron Pollard, who scored a 24-ball 60.

“It was a great game of cricket. We were not in the game at all when we started off with the bat. Great innings by Ishan there and then Pollard was brilliant as usual for us. It is just that we couldn’t start well. I thought we could chase 200 with the batting power we have. We didn’t get the momentum in the first six-seven overs and also lost three wickets,” he felt.

“With ‘Polly’ being there anything can happen. Ishan was also hitting it well so we had the belief that we would get there. Nothing to take away from RCB they held their nerve more than us. He (Kishan) was drained out and was not comfortable. We thought we could send him, but he was not feeling fresh. Hardik (Pandya) is somebody we trust to hit long balls; it is not coming off but we are confident he can pull things off for us. I mean seven runs you need to have luck on your side. We had to get wickets but there was also an unfortunate boundary. We came back really well and a lot of positives to take away from this game.”