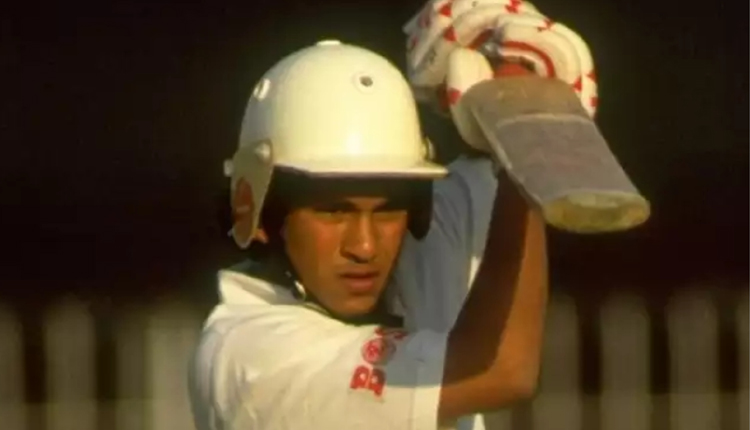 New Delhi: On 15 November 1989, Sachin Tendulkar made his international debut and went on to “inspire billions” across the globe with his impressive batting skills.

Sachin made his international Test debut against Pakistan that was played at the National Stadium in Karachi. In the same match, Salil Ankola and Pakistan’s pacer Waqar Younis had also made their debuts.

The right-handed batsman managed just 15 runs in his debut innings before he was castled by Waqar Younis. Tendulkar, however, did not get to bat again in the Test match which ended in a draw.

Coincidently, on November 15, 2013, Tendulkar went out to bat for the last time in international cricket during a Test match against the West Indies at the Wankhede Stadium in Mumbai. In his last international innings, Tendulkar managed 74 runs before he became the priced scalp of Narsingh Deonarine. India, under MS Dhoni’s leadership, went on to win the match by an innings and 126 runs.

“On This Day 1989 – Sachin Tendulkar made his debut in international cricket. 2013 – The legend walked out to bat for Team India one final time. Thank you for inspiring billions across the globe,” BCCI said in a tweet.

Thank you for inspiring billions across the globe. 🙏👏 pic.twitter.com/fF4TzH7O44

Check out our pick of the lots

Gods Debut on This Day

A career which spanned across Twenty four years and one day ,Began on this day 30 years ago in Karachi ,When #SachinTendulkar made his test and international debut versus Pakistan at the age of 16 .#31yearsofsachintendulkar pic.twitter.com/72NxegDCws

Wow! It’s 31 years to the day since #SachinTendulkar made his international debut as a 16 year-old. Remember the time? pic.twitter.com/MStIPENyqZ

What are your favourite Sachin and Waqar moments? pic.twitter.com/Q9F6QpHQv5

On this day 1994, we got a legend and we lost a legend 🥺 #SachinTendulkar #SachinDebutDay #Legend pic.twitter.com/a3Ix1EaMSO

This is one awesome video !

in 2013: At the Age of 40, Batted for the Last Time for India in Tests – against West Indies in Mumbai.#SachinTendulkar #SachinDebutDay @BCCI pic.twitter.com/lmemB8qXbd