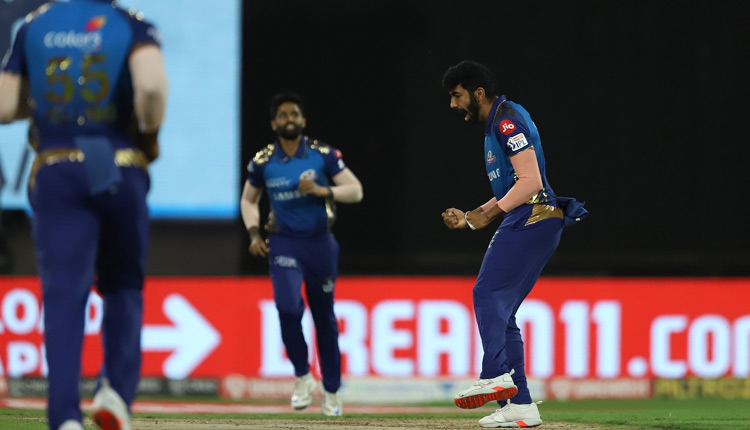 The win took MI’s points tally to 16 from 12 games and they continue to sit atop the table while RCB remain static at the second place with 14 points. Both have played 12 matches each, and two more games are left for each team.

Opting to field, MI restricted their opponents at 164/6 wickets in 20 overs, thanks to Bumrah’s stunning effort with the ball. In return, MI endured a few hiccups but Suryakumar ensured to drive his team home with five balls and as many wickets to spare. MI finished at 166 for five wickets in 19.1 overs.

Suryakumar on the other hand kept the scorers busy. Saurabh Tiwary, Hardik Pandya and Krunal Pandya chipped in with five, 17 and 10 runs respectively, before getting dismissed.

However, despite wickets tumbling at the other end, Suryakumar patience in the middle finally paid. The Mumbai batter notched up his half-century off 29 balls.

He further went on to steer his side home when he smashed Siraj for a boundary over extra cover in the first delivery of last over as MI registered their eight win of the season.

Suryakumar’s unbeaten knock was laced with 10 boundaries and three sixes.

For RCB, Siraj and Chahal bagged couple of wickets each.

Earlier, RCB suffered a middle-order collapse however, opener Devdutt Padikkal’s valiant 74 and Josh Philippe’s 33 helped their side post 164/6 in the allotted 20 overs as Jasprit Bumrah once again starred with the ball with figures of 3/14.

Padikkal and Philippe took RCB to an ideal start, adding 54 runs in the first six overs.

Rahul Chahar (1/43) got the first breakthrough when he got rid of Philippe in the eighth over which saw Kohli (9) coming in the middle.

The RCB skipper was involved in a brief 24-run stand with Padikkal before falling to Bumrah, who meanwhile, also completed his 100 scalps in the league’s history.

AB de Villers (15) too, tried to stabilise the innings but faltered, becoming a victim of Kieron Pollard, leaving RCB at 131/3 in 15.2 overs.

RCB lost three wickets within another seven runs which left them reeling at 138/6.

Washington Sundar (10) and Gurkeerat Singh (14 not out) added 26 runs off the final 16 balls as RCB reached a modest total.

Also Read: ‘You Were Winners Then, You Are Winners Now’: CSK Out Of IPL Playoffs Race