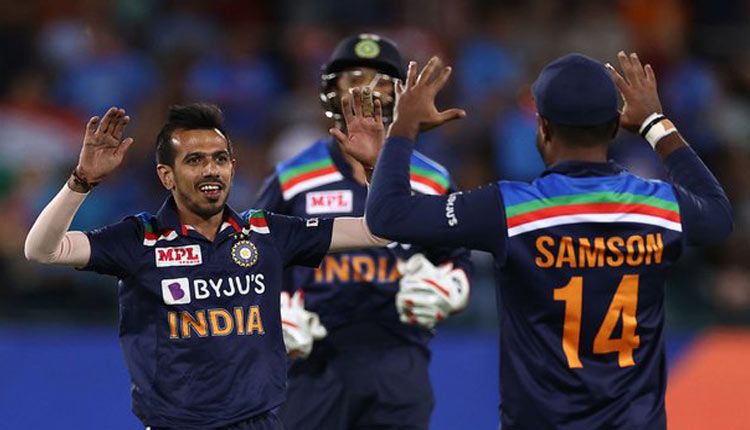 Canberra: Yuzvendra Chahal turned out to be the perfect concussion substitute after an injured Ravindra Jadeja did his part with the bat as the duo played their roles to perfection in India’s impressive 11-run victory over Australia in the first T20 International here on Friday.

India win by 11 runs in the first T20 match against Australia in Canberra; India lead the three-match series by 1-0#INDvAUS pic.twitter.com/K73r2HxUqd

While Jadeja smashed an unbeaten 44 off 23 balls to propel India to 161 for 7, his head injury turned out to be a blessing in disguise with India unleashing Chahal (3/25 in 4 overs) on an Australian side caught completely off-guard. The hosts could manage only 150 for 7 in 20 overs.

Credit was also due to the lion-hearted effort from debutant Thangarasu Natarajan (3/30) and off-spinner Washington Sundar (0/16 in 4 overs), who bowled well in Powerplay.

ICC match referee David Boon allowed the visitors a “like for like” replacement, as mandated by the rules, for Jadeja in Chahal even though home team coach Justin Langer looked visibly angry.

And to make matters worse, Chahal dimissed two form men — Aaron Finch (35) and Steve Smith (12) — in his first two overs to turn the game on its head.

The Australians were not prepared for Chahal, who bowled way better in his most preferred format, varying the pace of his deliveries and using the flight to good effect.

Natarajan, whose nerves had eased after a decent ODI debut, was right on the money and got one to straighten catching Glenn Maxwell plumb in-front.

If that wasn’t enough, Natarajan snuffed out a frustrated D’arcy Short (34 off 38 balls) to make it 113 for 4 and India didn’t have to look back from then on.

Earlier, vice-captain KL Rahul continued his impressive run in the shortest format with yet another fifty but it took Jadeja’s brilliant back-end flourish to take India to a fighting total.

The Indian vice-captain hit 51 off 40 balls but leg-spinner Adam Zampa (1/20 in 4 overs) and all-rounder Moises Henriques (3/22 in 4 overs) were brilliant between overs 11th and 15th, which shifted the momentum in favour of the home team till Jadeja came into play with a 44 not out off 23 balls.

However, Jadeja (five fours and a six), who suffered from hamstring trouble, launched into Josh Hazlewood and Mitchell Starc in the final two overs that yielded 34 runs taking Indian to a par-score at the Manuka Oval.

The Indians found Zampa difficult to get away as he conceded only one boundary while Henriques conceded just a six, cleverly varying the pace of his deliveries with a good mix of cutters and seam-up stuff.

Rahul, who hit five fours and a six, along with Samson and the dangerous Hardik Pandya (16 off 15 balls) were deceived by the pace of pitch where driving on the up wasn’t an easy job.

Mitchell Starc (2/34) was also quick and incisive at the start but got hit during the death overs.

Four days of rest had done Starc a world of good as he found both his length and swing back at the start. At a scorching 145 clicks, he bowled one that shaped away from Shikhar Dhawan starting on middle-stump and knocking the off-stump back.

Rahul’s first boundary was a mis-hit off Hazlewood over third-man, followed by a cover drive off Zampa.

Another streaky boundary off Sean Abbott was topped up by a regal pull-shot into the mid-wicket stands.

Inexperienced leg spinner Mitchell Swepson (1/21 in 2 overs) repeatedly bowled short but did snap a prized catch in rival skipper Virat Kohli (9) when a ball stopped on him and the result was a return catch off a leading edge.

But Rahul punished him and so did Samson, who rocked back to hit him for a six. Rahul’s half century came off 37 deliveries.

However, as has been Samson’s trait, he perished when Henriques bowled an off-cutter and the uppish cover drive.

He was pouched by Swepson and India’s innings went down south from that moment before Jadeja did redeem it.

Saif Ali Khan’s Tandav Can Be a Boon For…