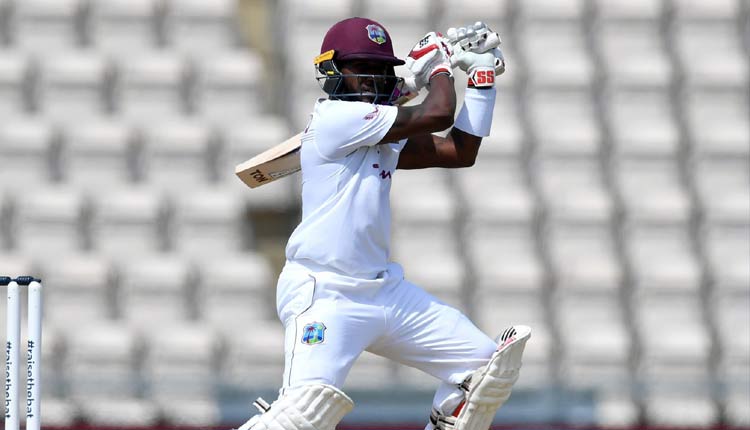 An all-round performance helped the West Indies team to pull out a surprise 4 wicket win against the hosts England at Southampton in the first-ever cricket test match after the coronavirus pandemic-enforced hiatus.

Jermaine Blackwood struck a resilient half-century to keep West Indies on course for victory as they were 143/4 at Tea, needing 57 more runs against England on Day 5 of the first Test at the Ageas Bowl on Sunday. The hosts need 6 wickets.

Jofra Archer spoiled Roston Chase (37 off 88b; 1×4) and Blackwood’s impressive fightback with a late wicket but Blackwood negotiated the barrage of bouncers well and also kept a cool head on his shoulders to emerge as the unlikely hero as he guided a James Anderson delivery past first slip to bring up his half-century.

Blackwood remained not out on 65 from 110 balls, his innings laced with eight fours. Wicketkeeper Shane Dowrich was batting with him and went into the break on 15.

The Windies were reeling at 35/3 going into Lunch chasing 200 for a win after England gun-quicks Archer and Mark Wood breathed fire to shave off the top-order.

Chase and Blackwood then joined hands to share a 73-run stand for the fifth wicket before Archer bowled a perfect bouncer to get the batsman caught behind by wicketkeeper Jos Buttler.

Minutes later, Dowrich survived another nasty Archer bouncer which hit his chest and was taken at first slip only for reviews to show there was no bat involved.

The hosts had handed their rivals three chances before the Archer breakthrough with Buttler, Zak Crawley and Rory Burns missing opportunities to break the partnership.

Archer, who remained wicketless in the first innings and drew some flak with veteran Stuart Broad not getting picked in the XI, bounced back in style.

Earlier in the day, England resumed their second innings on 284/8 and could add 29 runs more as they were bundled out for 313. Shannon Gabriel started from where he had left off on Day 4 as he removed both overnight batters Wood and Archer.

Mark Wood was the first to go, nicking a cut to wicketkeeper Shane Dowrich. Archer played well for his 23 but was also caught behind, trying to pull. Gabriel finished with superb figures of 5/75.

During the chase, the visitors looked nothing like the way they batted in their first essay as the top three collapsed in quick succession after opener John Campbell hit his foot with the bat trying to defend a Archer toe-crusher and had to retire hurt. Much of it was due to the way English bowlers bowled in the right areas and with venom.

Kraigg Brathwaite (4) was the first to go, dragging a quick delivery from Archer onto his stumps. Shamarh Brooks (0) was trapped in front while the tourists’ batting mainstay, Shai Hope (9), was undone by a low in-dipper from Wood that knocked off his stumps.

First game after the break belongs to us!

Some gritty performance from the lads. This team deserves the win in this game. Congratulations boys

Good all-round performances by players from both teams.
Jermaine Blackwood played a crucial knock in a tense situation to see @windiescricket through. An important win which has set up the series perfectly. #ENGvWI pic.twitter.com/PLbJlqIe8c