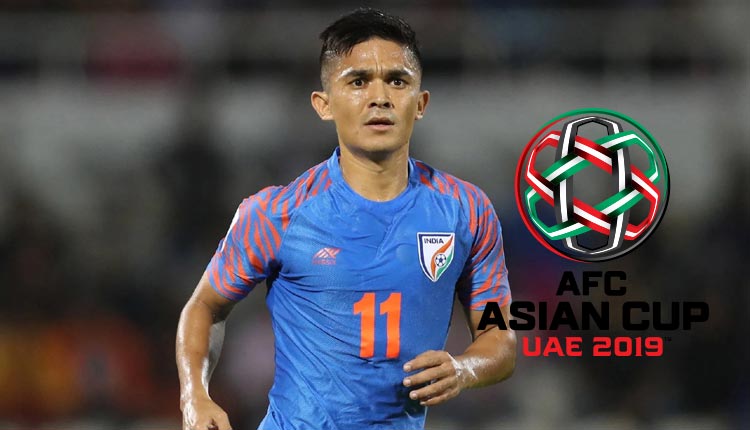 New Delhi: Indian captain Sunil Chhetri was voted as the favourite player of the AFC Asian Cup 2019, the Asian Football Confederation said on Saturday. Chhetri edged out Eldor Shomurodov of Uzbekistan in the final by a 51-49 percent of votes in a fan poll conducted by the AFC.

“19 days, 561,856 votes The #AsianCup2019 favourite player has been decided. Congratulations Sunil Chhetri!” said the AFC in its tweet announcing the result.

35-year-old Sunil Chhetri scored twice during the group stage of the Asian Cup last season in which India came close to securing a shock Round of 16 spot. Both goals came in their 4-1 win over Thailand in the opening match.

With 72 goals and 115 appearances, Chhetri is India’s all-time highest goalscorer and the most-capped player. Chhteri was earlier named an Asian Icon by the AFC on his 34th birthday.

Chhetri had earlier urged the Indian women’s team to leave no stone unturned and start preparing from now itself for the AFC Women’s Asian Cup scheduled to be held in India in 2022.

In June this year, AFC granted India the right to host the coveted continental tournament. This makes it the second major women’s tournament to be held in India in the space of two years after the FIFA U-17 World Cup 2021.

“It is an amazing opportunity that they have — to play in such a high-level tournament. These are the levels where you want to be, playing the best in the continent,” Chhetri, who holds the distinction of being the only Indian player to have appeared in two different editions of an Asian Cup, said.

“I’d like to urge all of them to start preparing for the tournament from now on itself. The last thing you want to do is feel regret once you start playing the tournament.

“Look into every small aspect of your game and try to improve it — your touch, speed, saving ability, shooting, burning those extra body fats — the process needs to start from right now,” he added.

IPL 13: BCCI Hopes To Get All Government Clearance Soon

Sonakshi Sinha Inspires With Her Latest Posts Against Cyberbullying