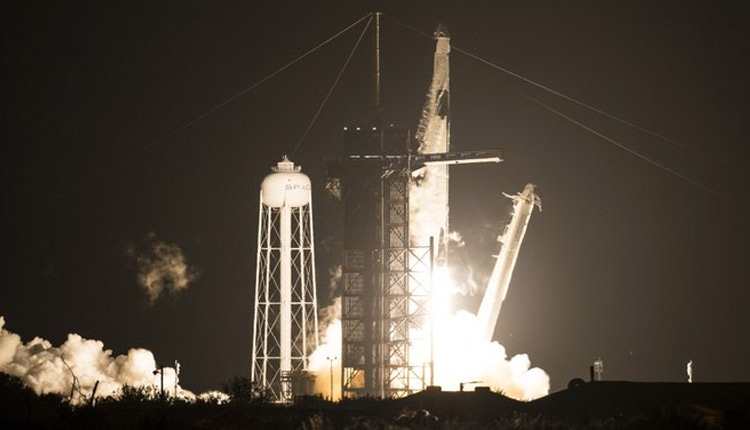 The Falcon rocket on Sunday thundered into the night from Kennedy Space Center with three Americans and one Japanese, the second crew to be launched by SpaceX. The Crew Dragon lifted off atop a SpaceX Falcon 9 rocket at 7.27 p.m. EST on Sunday.

The Crew-1 mission has lifted off on a Falcon 9 rocket from @NASAKennedy at 7:27pm ET and is en route to the @Space_Station. #LaunchAmerica pic.twitter.com/5Q3uXSLvqt

“This is a great day for the United States of America, and a great day for Japan, and we look forward to many more years of a great partnership… All the way to the Moon,” NASA Administrator Jim Bridenstine said on the launch of the mission.

Crew-1 is the first crew rotation flight of a US commercial spacecraft with astronauts to the space station following the spacecraft system’s official human rating certification.

The four astronauts will spend six months at the space station for their research.

The Crew Dragon is scheduled to dock to the space station at about 11 p.m. on Monday, NASA said.

Sidelined by the coronavirus himself, SpaceX founder and chief executive Elon Musk was forced to monitor the action from afar. He tweeted that he “most likely” had a moderate case of COVID-19. NASA policy at Kennedy Space Center requires anyone testing positive for coronavirus to quarantine and remain isolated.

Sunday’s launch follows by just a few months SpaceX’s two-pilot test flight. It kicks off what NASA hopes will be a long series of crew rotations between the U.S. and the space station, after years of delay. More people means more science research at the orbiting lab, according to officials.

Cheers and applause erupted at SpaceX Mission Control in Hawthorne, California, after the capsule reached orbit and the first-stage booster landed on a floating platform in the Atlantic. Musk tweeted a single red heart.