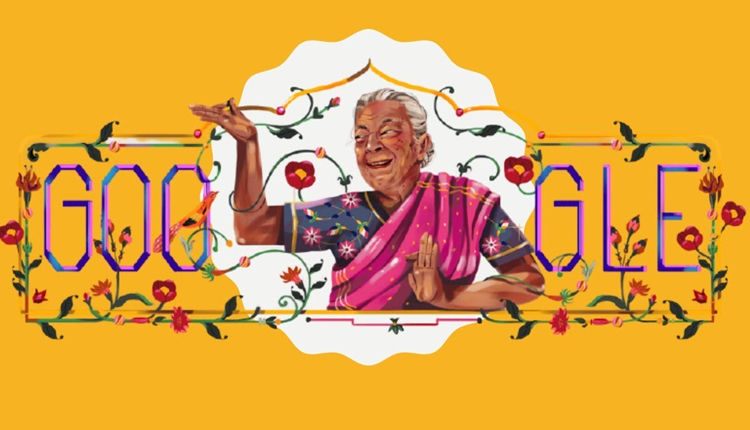 Mumbai: Google on Tuesday paid tributes to the legendary actor-dancer Zohra Sehgal by dedicating a special doodle to her that perfectly captures the screen icon’s joie de vivre.

On this day in 1946, “Neecha Nagar”, starring Sehgal, was released at the Cannes Film Festival and won the Palme d’Or prize. The movie, according to Google is Indian cinema’s first international critical success.

Illustrated by guest artist Parvati Pillai, the doodle shows the late actor’s sketch replacing the O of ‘GOOGLE’ and showing one of her iconic dance step from the song ‘Jiya Jale’ from Mani Ratnam-directed “Dil Se”.

Born on April 27, 1912 in Saharanpur, Uttar Pradesh in a traditional Muslim family, Sehgal grew up in Chakrata, Uttarakhand and was sent to Lahore for higher education.

Sehgal started her career as a dancer with Uday Shankar in 1935. She had appeared in many Bollywood films as a character actor as well as in English language films besides television series and plays.

She moved to London on a drama scholarship in 1962 and built an international profile with roles in British television classics Doctor Who and The Jewel in the Crown” among others.

In the mid-1990s, she returned to India and continued acting on the stage and in Bollywood films.

Sehgal went on to feature in hits like “Cheeni Kum”, “Dil Se”, “Veer Zaara”, “Hum Dil De Chuke Sanam”, “Bend It Like Beckham”, among others.

As a dancer, she performed across Japan, Egypt, Europe and the US. She choreographed for a few Hindi films as well, including classics like Guru Dutt’s “Baazi” and the dream sequence song in Raj Kapoor’s film “Awaara”.

Twitter Rolls Out Topics Feature In India In English, Hindi