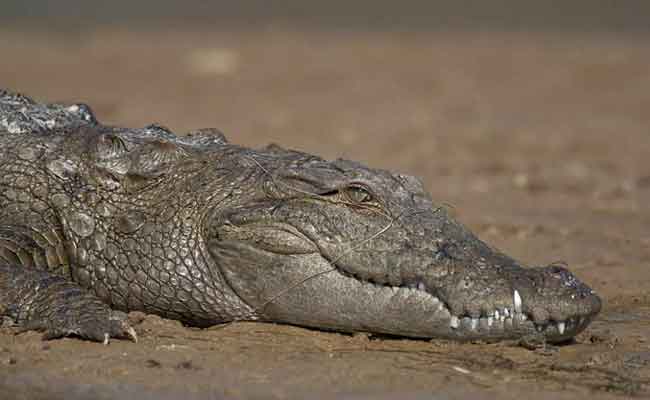 Bhubaneswar: There is some heart-warming news for wildlife lovers from Ganjam district. The number of muggers, an endangered crocodile species, in the district’s Ghodahada irrigation reservoir and adjoining water bodies has gone up to 65 from 58 last year.

While 44 muggers were found in the 5 sq km reservoir, 21 were counted in the nearby water bodies, according to forest officials. The increase is being attributed to habitat improvement. Ghodahada reservoir is considered as one of the potential habitats for the muggers in the state after Similipal.

The rise in the population of muggers (Crocodylus palustris) is particularly significant because Odisha is one of the few states in the country where all the three species of crocodiles, the other two being Gharials (Gavialis gangeticus) and Saltwater crocodiles (Crocodylus porosus) are found. By the seventies, all these species were on the verge of extinction in the state, thanks to intensive human activity in rivers and their other traditional habitats.

The survival rate of the crocodile hatchlings, too, was relatively low due to heavy predation. A crocodile conservation project in Odisha was launched in 1975 based on the report of Dr. H.R. Bustard, a well-known expert who had studied the factors behind the decline in the population of these reptiles all over the country. To begin with, a programme for the conservation of Gharial and Saltwater crocodiles was initiated in the state and it was followed by a project for Mugger conservation.

The basic purpose of these projects with units based at Tikarpara in Angul district, Dangmal in Kendrapara’s Bhitarkanika national park and Ramatirtha in Similipal was to make up the natural loss of the species through death and predation by engaging in the rear and release operation. Besides captive breeding of all the three species was undertaken at the Nandankanan Biological Park.

Under the Saltwater Crocodile ( locally known as Baula) project at Dangmal in Bhitarkanika sanctuary crocodile eggs are collected locally and young crocodiles are released in the creeks and the estuaries of the wildlife habitat. The operation has been reasonably successful with the population of these crocodiles increasing in the Bhitarkanika river system. A similar strategy was followed at the Ramatirtha centre meant for Mugger crocodiles. The project began initially with mugger eggs and juveniles procured from Tamil Nadu.

At Tikarpara, Gharial eggs were obtained at regular intervals from Narayani and Kali rivers in Nepal, and Chambal sanctuary in Madhya Pradesh, Rajasthan and Uttar Pradesh. Some hatchlings of Gharial were obtained from eggs incubated in Royal Chitwan National Park of Nepal and Katarniyaghat sanctuary in Uttar Pradesh. All Gharials reared at Tikarpara and those produced through captive breeding at Nandankanan, numbering more than 700, were released in the Mahanadi river between Boudh and Katrang.

Thanks to such efforts the population of all the three species of crocodiles has shown an increase in the state but they still remain threatened in the wild. The significance of mugger conservation drive in Ghodahada has to be seen in this perspective. The state needs more such projects to protect and enrich its wildlife.