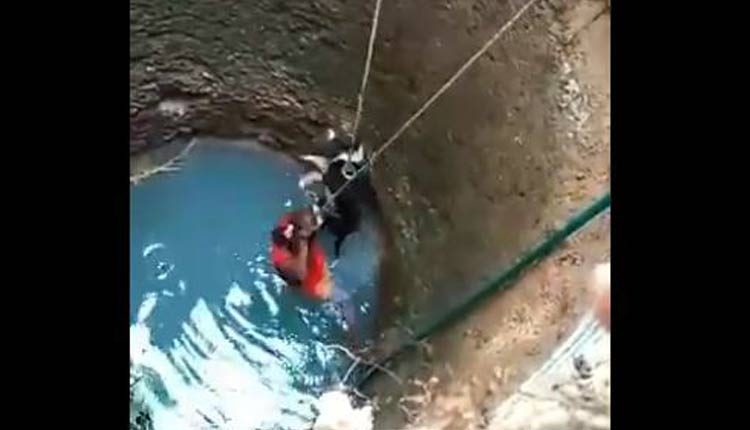 New Delhi: A video of a woman bravely climbing down a well in Mangaluru to rescue a dog who fell into it accidentally, is doing the rounds on the internet and has created a buzz on social media.

The whole incident of the rescue was shared by a Twitter user with caption: “Bless the lady who saved the Dog”.

In the video, the woman can be seen hanging using a rope to descend the walls of the water source while few people can be seen standing outside the well.

They throw a rope inside and with that the woman ties it around the dog. The people then pull up the rope attached to the dog. As soon as the dog comes out, it runs free.

As the post went viral, the Netizens hailed the woman for her bravery.

A user wrote: “Hopefully people will become more sensitive towards all life forms and someday we will have a world free from animal slaughter and other brutalities.”

“This lady is actually doing something unlike the activist animal lovers who just click selfies with their dogs & cats.”

Another wrote: “They must keep these wells and borewells covered.”

“Very much adorable & respectable act to save a life be it any animal !!” read one post.

Tweeple remarked, “Must be a great animal lover to risk her life. Such a deep well and look at her guts . Really she deserves a Padma award. Pride of every Indian woman.”

Bless the lady who saved the Dog ? pic.twitter.com/UfguvHBnAG

Coronavirus Scare: Suspected Cases Go Up To 5 In Odisha