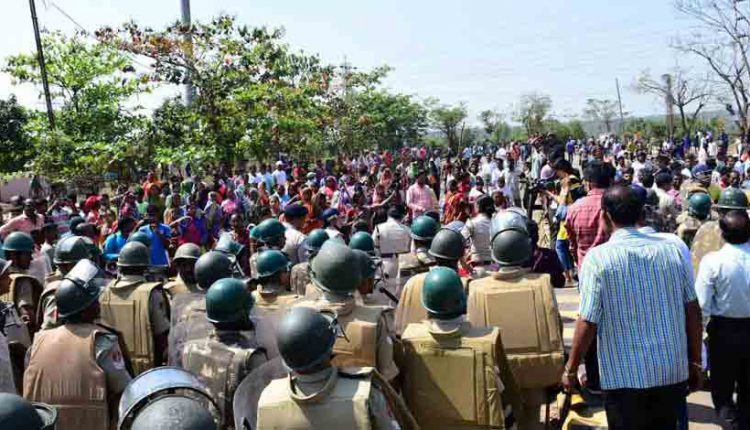 Bhubaneswar: Tension ran high near Kalinga Hospital in Bhubaneswar on Wednesday after hundreds of residents of Salia Sahi slum congregated to oppose an eviction drive by the administration.

According to reports, a team of Bhubaneswar Development Authority (BDA) and Bhubaneswar Municipal Corporation (BMC) along with police reached the spot to evict the slum dwellers to make way for construction of roads to ease traffic congestion between Jaydev Vihar and Patia Square.

Commissionerate Police had deployed nine platoons of force to avoid any untoward incident. However, the protest by the slum dwellers was so strong that there were crowd control issues, following which DCP Anup Sahoo and Traffic DCP Sagarika Nath rushed to the spot.

The protesters raised slogans against BDA, BMC and the State government by holding placards and posters. They alleged that the eviction drive is being carried out when several children from the slum are in the middle of their Matric exam. Besides, they claimed that the eviction drive, which is done without prior notice, should be done only after their rehabilitation.

“We welcome the initiatives of BDA and BMC. However, they should rehabilitate us before demolishing our houses. They (concerned officials) should also understand that this is forest land,” said Anjan Nath, president, Salia Sahi Regional Committee.

Sal Marndi, member of Salia Sahi Regional Committee said, “They are violating the provisions of the Scheduled Tribes and Other Traditional Forest Dwellers (Recognition of Forest Rights) Act, 2006 and Indian Forest (Amendment) Bill, 2012. Besides, we have not been informed by the concerned officials about the eviction drive today.”

“We have discussed with the locals. As of now we will clean the open spaces and commercial spaces. Work of the rehabilitation colony is underway and they will be shifted after the completion of the school exams,” the BMC Commissioner said.

Source said that more than 220 houses will be demolished to construct the roads and the affected people will be given a 300 square-feet land and a cash compensation of Rs 25,000.