Heart-Melting Reunion: NDRF Chief’s Tribute To His Teacher After 39 Yrs 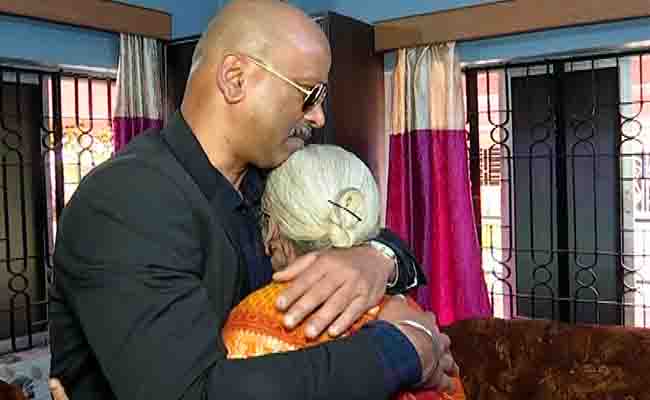 Bhubaneswar: Hindu tradition considers a teacher as God in human form and a dispeller of darkness who is given highest veneration by people. He or she is a selfless individual who lays the foundation stone for the bright future of students. Even today the sacred relationship between a teacher and pupil in Indian society makes it unique in the entire world.

And when the teacher happens to be a woman, her motherly love makes the relationship even more incredible which was quite evident from the heart-melting reunion of NDRF DG Satyanarayan Pradhan and his school teacher Anjali Ray in Bhubaneswar.

Pradhan who was in Odisha to attend a function today took the most opportune time to pay tribute to his beloved teacher when he met her today after nearly four decades when the entire world celebrated the International Women’s Day.

While for Pradhan it was pure bliss to meet his role model, it seemed like true Guru Dakshina for Anjali who is now struggling with after-effects of cancer. From the very first moment when they both set their eyes on each other, the get-together was so emotional that both the teacher and the student could not stop breaking down in each other’s arms.

According to sources, Pradhan was a student of a Kendriya Vidyalaya in Bhubaneswar when Anjali was his music teacher in the school. Pradhan says his teacher played a vital role in shaping his character which helped him not only become one of the topmost officers in the country’s apex disaster management organisation but most importantly motivated him to become a good man.

Speaking to OTV during the occasion, an emotional Pradhan said, “A few days ago I came to know about her illness and could not stop myself from visiting her. She was not a teacher but much more than a sister and a protective mother for me and our friends with so much affection for all of us.”

“I don’t have any words to express the feelings after finding him (Pradhan) before my eyes and time seems to have run fast as if 1981 was just a few years ago,” a teary-eyed Anjali said.