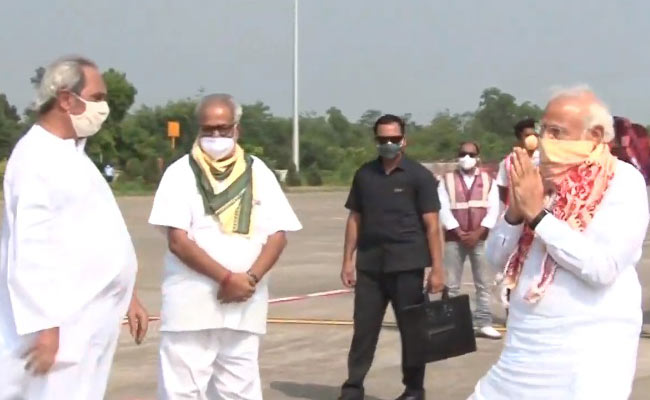 Modi further stated that soon a central team will visit Odisha to review the situation and further assistance will be released based on the final report submitted by the State government.

At the same time, there has been damage to property, which we reviewed in a meeting today.

All possible assistance will be provided by the Centre to ensure quick relief work.

Rs. 500 crore will be given to Odisha as advance assistance: PM @narendramodi in Odisha

“The nation stands in solidarity with our sisters and brothers in West Bengal and Odisha. The Central Government assures all possible support as well as assistance towards the rehabilitation, restoration and reconstruction efforts,” tweeted Modi.

The Prime Minister earlier took stock of the devastation caused by cyclone Amphan in Odisha by undertaking an aerial survey of the affected districts. He was accompanied by Odisha Governor Ganeshi Lal and Chief Minister Naveen Patnaik. Later, he held a review meeting with senior officials of Odisha government. Two Union Ministers- Dharmendra Pradhan and Pratap Sarangi were also present during the review meeting.

We will work together to ensure that affected and distressed people are taken care of and normalcy is restored at the earliest.#OdishaCares pic.twitter.com/Ja2zZQFekL

Hon. PM Shri @narendramodi ji conducted an aerial survey of the affected districts in Odisha to assess the impact of #CycloneAmphan in the state.

Grateful to have accompanied him along with Hon. CM Odisha Shri @Naveen_Odisha and Union Min. Shri @pcsarangi. pic.twitter.com/eG5ZOIsIdG

“Modi Govt has always stood with the people of Odisha in the past and will stand shoulder to shoulder with Odisha, especially during difficult times. Thank PM Modi for providing Rs 500 crore assistance to Odisha for combating Cyclone Amphan. This will help the state govt in providing immediate relief to the affected people and further strengthen relief and rehabilitation in the cyclone-hit regions,” tweeted Union Minister Dharmendra Pradhan.

Modi reached Biju Patnaik International Airport (BPIA) after an aerial survey in West Bengal which bore the maximum brunt of the extremely severe cyclonic storm Amphan. He said that Rs 1,000 crore would be provided by the Centre as immediate assistance to battle the crisis.

The Prime Minister also said that Rs 2 lakh would be given to the next of kin of the deceased persons while those who suffered serious injuries will get Rs 50,000 each for necessary treatment.

He has always done justice to our needs, whether it be investment infrastructure or aid. Today he won hearts yet again with his empathy & generosity🙏🙏 pic.twitter.com/vY5zm2oGbu

Expressing concern about people’s well-being in the wake of devastation caused by cyclone Amphan, President Ram Nath Kovind said, “I spoke to Odisha Governor Ganeshi Lal and CM Naveen Patnaik and conveyed to them that in this hour of crisis the nation stands united in supporting the affected people in every possible way. I pray and hope that the region will emerge stronger from this crisis soonest.”

I spoke with the Governor of Odisha, Prof. Ganeshi Lal, and Chief Minister Naveen Patnaik, today and expressed my concern about people’s well-being in the wake of devastation caused by Cyclone Amphan.

Delhi CM Arvind Kejriwal has also extended support to Odisha and West Bengal in the wake of the destruction caused by cyclone Amphan. In a series of tweets addressed to the Chief Ministers of Odisha (Naveen Patnaik) and West Bengal (Mamata Banerjee), Kejriwal offered help on behalf of the people of Delhi.

Dear @Naveen_Odisha ji, on behalf of the people of Delhi, I extend our full solidarity and support with you and the people of Odisha in the wake of the destruction caused by #CycloneAmphan. Kindly let us know if we could help in any manner in this hour of crisis.

The extremely severe cyclone Amphan made landfall in West Bengal on Wednesday afternoon (May 20) with the wind speed gusting to 185 kmph, accompanied by heavy rainfall, causing extensive damage in several parts of the State. At least 80 people have lost their lives due to the cyclone, sources said.