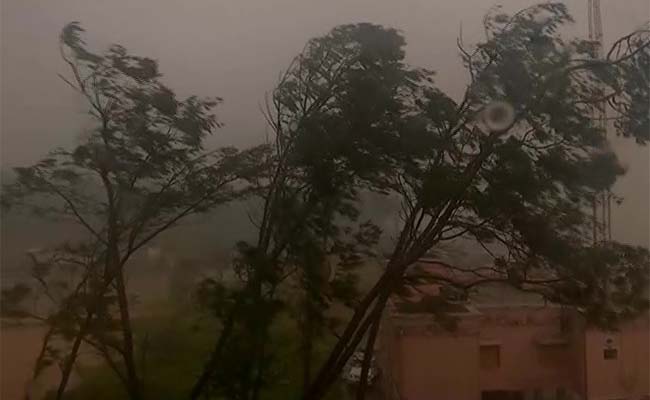 As per the IMD, the super cyclone hit the landmass as an extremely severe cyclonic storm on West Bengal-Bangladesh coast between Digha (West Bengal) and Hatiya Islands (Bangladesh) across Sunderbans between 3.30 pm and 5.30 pm. It recorded a maximum sustained wind speed of 155-165 kmph gusting to 185 kmph during landfall.

Horrifying scenes of nature’s fury from Digha (West Bengal) during landfall of #CycloneAmphan close to the coastal resort town#CycloneAmphanUpdates pic.twitter.com/pAf19eogPC

Speaking exclusively to OTV later in the evening, SRC Pradeep Jena said, “Impact of Cyclone Amphan in Odisha subsided after it completely entered the landmass where it will gradually weaken into a cyclonic storm and thereafter a depression.”

Breach in enclosure embankment on Patashala River leads to flood-like situation in Purusottampur village under Rajnagar Block of #Kendrapara#Odisha pic.twitter.com/0SBQPGmLqU

Calamity in a collage!#CycloneAmphan fury in parts of #Odisha & Sundarbans.

Under its impact, damage to trees, electricity structures, houses and telecommunication lines were reported from various parts of coastal Odisha especially in the four districts of Bhadrak, Jagatsinghpur, Balasore, Kendrapara where the cyclone had maximum impact.

SRC informed that restoration operations have been initiated on a war footing to clear roads and ensure that there is no disruption in essential services. Preliminary inspection of the grid, electric lines and structures are being carried out so that power can be restored in areas as per necessary availability of equipment and extent of damage on a priority basis, he said.

Odisha SRC Pradeep Jena speaks exclusively to OTV about damages caused by #CycloneAmphan & details about restoration operations in coastal districts of the State.

All concerned collectors have been asked to submit assessment report within 2 days so that the extent of damage caused by the super cyclonic storm can be broadly ascertained for necessary action.

More than 1.41 lakh people living in low-lying areas in thatched and mud houses in the vulnerable coastal regions were evacuated and shifted to cyclone shelters, the Special Relief Commissioner said.

The evacuees were accommodated in 2,921 shelters where cooked food and other facilities were provided, he said.

Thirty-six teams of NDRF and ODRAF have been deployed in the 12 coastal districts which were put on alert. Ten teams are in Balasore, seven in Bhadrak, six in Kendrapara and five in Jagatsinghpur, he said.

These apart, over 250 teams of fire services and 100 units of Odisha Forest Development Corporation have also been deployed. Roads blocked by uprooted trees are being cleared on a war footing, while power supply, if disrupted, will be restored at the earliest, the SRC said.

Meanwhile, though the casualties on account of the cyclone have not been confirmed by the State government, a three-month-old child died in Tihidi area of Bhadrak. While clarifying that the State government has received reports of the death, the SRC said that the exact cause will be ascertained after an autopsy.

Amphan is considered to be the second major super cyclonic storm in the Bay of Bengal after the super cyclone of 1999 which had claimed around 10,000 lives and inflicted large-scale devastation in Odisha.

The cyclone came a year after Fani barreled through Odisha on May 3 claiming several lives and causing widespread destruction.

Indian Railways Releases List Of Trains To Run From June 1, Bookings Open May 21