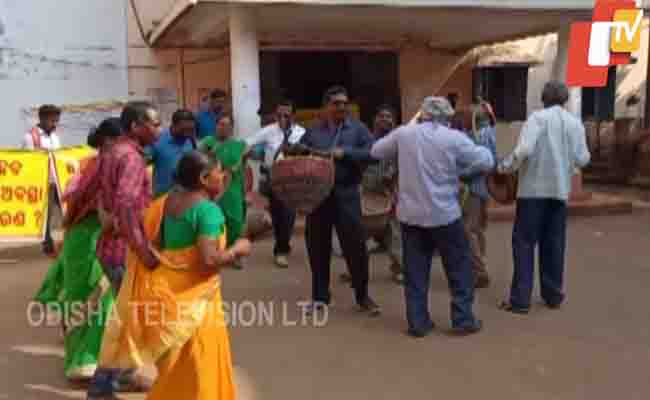 Baripada: In a bid to press their long standing demand, tribals resorted to a unique protest in front of Karanjia BDO office in Mayurbhanj district on Monday.

According to reports, several tribals had reportedly worked under the district Mahatma Gandhi National Rural Employment Guarantee Act (MGNREGA) scheme some years ago however they have accused the authorities of denying them their due payment.

Unlock 6.0: Will Temples & Religious Institutions Re-open In Odisha? Here’s All You…

The tribals alleged that despite repeated requests, the concerned officials did not pay any attention to their issue. Irked over the development, a group of MGNREGA beneficiaries from Miriginendi gram panchayat along with Batpalasa Samiti member staged a unique protest in front of Karanjia BDO office.

They marched to the BDO office by dancing and playing their traditional Dholak (drums), spread mosquito nets and relished Handia (rice beer) while staging a dharna in front of the office. Due to the agitation, the office remained shut till BDO Shibasish Baral reached the spot at 4 PM.

“We met the BDO time and again requesting him to resolve our issues. However, he gave excuses on every occasion. We were also threatened by some people when we asked for our money,” said one of the protesters.

Asked, BDO Shibasish Baral, has assured to look into the matter and give the protesters their dues. “We have received the money under MGNREGA and it will be released to beneficiaries’ accounts at the earliest,” said the BDO.

Unlock 6.0: Will Temples & Religious Institutions Re-open In Odisha? Here’s All…