Bhubaneswar: The weekend shutdown enforced in Odisha will result in a major financial setback of over Rs 1900 crore to the State, according to a report of the State Bank…

Bhubaneswar: The weekend shutdown enforced in Odisha will result in a major financial setback of over Rs 1900 crore to the State, according to a report of the State Bank of India.

The report suggests that Odisha will suffer economic loss to the tune of Rs 1927 crore due to current weekend shutdowns in all urban areas of the State. The total loss due to the pandemic curbs across the country is estimated at Rs 1.5 lakh crore of which Maharashtra, Madhya Pradesh and Rajasthan account for 80 per cent.

“Current SBI FY22 projection at 11% real GDP (RBI: 10.5%) and 15% nominal GDP growth (Union Budget: 14.4%) for FY22 on the back of low base effect and renewed economic momentum.However, given the current circumstances of partial/local/weekend lockdowns in almost all states, our growth forecast is now revised downwards,” the report said. 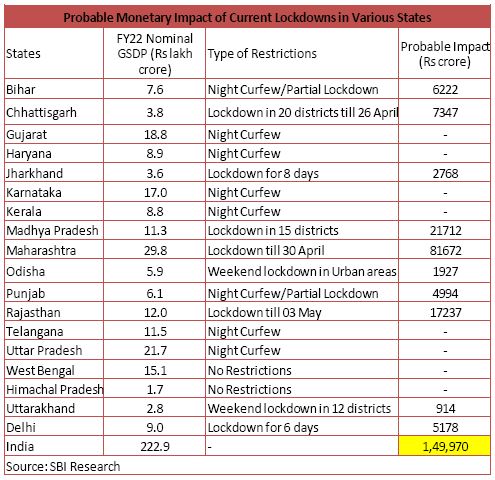 On the on-going Covid-19 vaccination drive, the SBI report said Odisha has 3.10 crore people above the age of 18 years are eligible to take vaccine. About 50 lakh people in the State have been vaccinated so far and the figure will shoot up to 60 lakh by April end.

Of the remaining 2.4 crore, if half of the population gets vaccinated by the Centre, Odisha will have to shell out Rs 968 crore to inoculate them which is about 10 per cent of the state’s health expenditure budget.

Meanwhile, experts have claimed Odisha has enough resources to vaccinate the eligible beneficiaries.

Economic expert Rajeev Sahoo said, “The impact of weekend shutdown is low in Odisha so far. However, if the government will enforce more restrictions in coming days to tackle the infections, it will have adverse impact on the economy.”

“At present Odisha’s economic condition is good. The Odisha government has the resources to absorb the expense of the vaccination of the remaining beneficiaries. There is no need to worry,” he added. 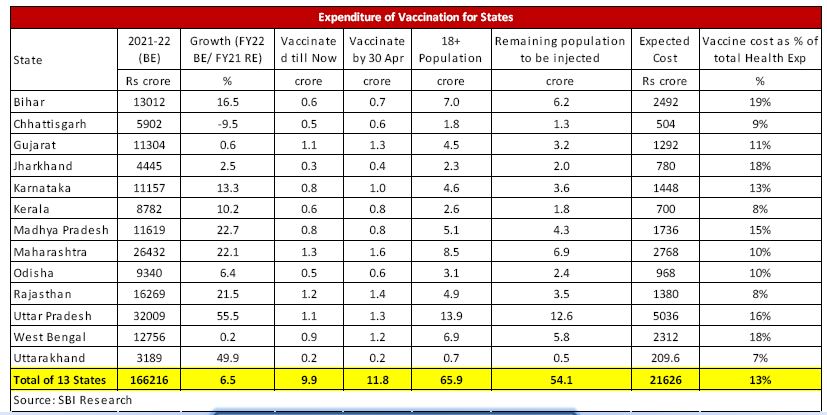 Sudhakar Panda, secretary of Odisha Traders’ Association, “Shutdowns will have major impact on traders. Since March 22 last year, traders are lagging behind in social, financial and other sectors. We can say that the pandemic curbs have broken their backbone.”

“Due to the second wave of Covid-19, the government has imposed weekend shutdown and we welcome the move. In view of gravity of the situation, there are proposals among us that we will shut our establishments for 15 days from May 1. We will take final decision in this regard in our executive committee meeting after consultation with the government,” Panda added.