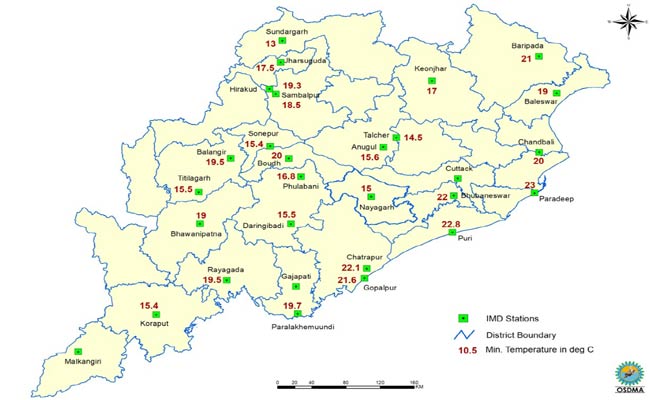 Bhubaneswar: Several parts of the State witnessed spells of rainfall on Wednesday due to prevailing cyclonic circulation system over Haryana and Bangladesh and a trough line above Odisha. While night temperatures witnessed a drop of 2-3 degree Celsius, officials of the Regional Meteorological Centre have predicted that cold wave conditions will return to Odisha as mercury is likely to dip further in the coming days.

The minimum temperature will probably fall by 3-5 degrees over the districts in Northern Odisha during the next 2-3 days. Rest of the districts will experience a dip by 2-3 degree C in subsequent two days, sources said.

“As per latest reports, the trough line has subsided now. So the weather will mostly remain dry for the next two days. Light to moderate showers may reoccur from February 1 in South and South-east Odisha including Kalahandi.
During these two days, the temperature may dip by 3 to 5 degree Celsius in North interior Odisha bringing back the cold that had subsided for a few days,” he said.

Issuing a fog warning for the next 24 hours, Behera said, “There is a forecast of dense fog in parts of Kalahandi, Kandhamal, Angul, Sundergarh, Dhenkanal, Jajpur, Bhadrak and Keonjhar districts.”

Meanwhile, the Met has warned of light thunderstorm with lightning and light to moderate rainfall at one or two places over the districts of Mayurbhanj, Keonjhar, Balasore, Bhadrak, Dhenkanal, Kendrapara, Cuttack, Jagatsinghpur, Khurda, Puri till 4:30PM today.