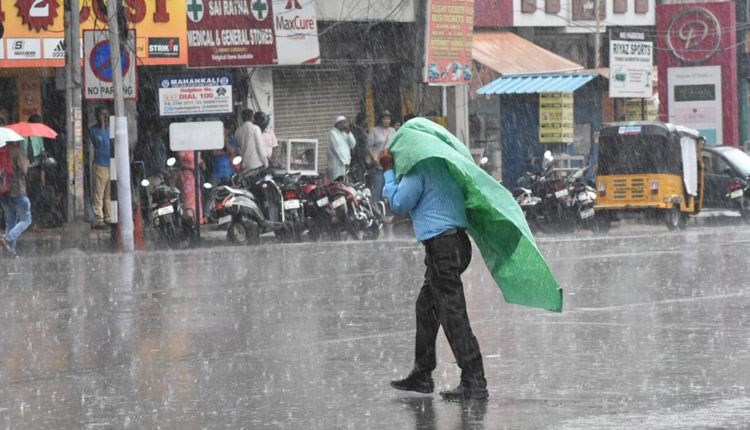 Bhubaneswar: The Regional Meteorological Centre here issued thunderstorm with lightning and light to moderate rainfall warning for 17 districts of the State on Wednesday.

The Met Centre had yesterday informed that the deep depression over north Andhra Pradesh coast close to Kakinada is very likely to move west-north-westwards and weaken into a depression during next six hours and further into a well-marked low pressure area during the subsequent 12 hours.

Under its influence, heavy rainfall is very likely to occur at one or two places over the districts of Gajapati, Ganjam, Rayagada, Khordha, Puri, Malkangiri, Koraput, Nabarangpur, Kalahandi and Kandhamal districts.

Meanwhile, the extremely heavy rainfall since the last couple of days wreaked havoc in various districts of south Odisha including Koraput, Rayagada and Ganjam.

As per information, incessant rainfall which has been lashing the region since yesterday caused a landslide in the hilly area between Tadkasahi and Chariabad village under Ankuli panchayat in Ganjam district. The rock collapse severely disrupted communication in the area.

Five villages under Ankuli and Buratal Gram Panchayats in Patrapur block of Ganjam district have been marooned after floodwater from Baghalati Irrigation Project entered the villages.

Connection to as many as 15 villages in the area was completely cut off due to the washing away of the bridge, added reports.

The rise in water-level of Rushikulya and Jarau rivers have triggered flood fear among the people of low-lying areas in the district.

The Rayagada district administration has also kept themselves alert for any kind of flood threat and deployed an ODRAF team in Ramanaguda.