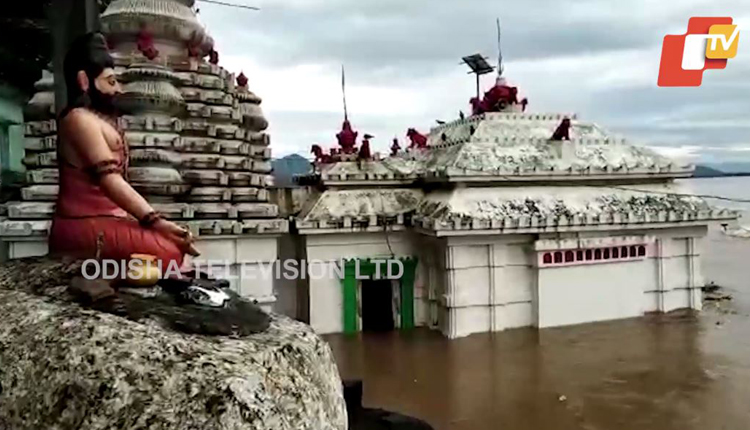 Cuttack: One of the iconic shakti peeths in Odisha, the temple Goddess Bhattarika in Baramba Tehsil of Cuttack district submerged after floodwater from Mahanadi river entered the shrine and its complex.

Following the State government’s warning for a possible flood in the Mahanadi river basin, the servitors and officials of the temple administration made all preparations to relocate the deity of the Goddess to a temporary site so that the daily rituals don’t get disrupted.

Late on Wednesday night, the deity was shifted to safer location atop the hilltop situated adjacent to the shrine after floodwater gushed into the sanctum sanctorum of the temple.

Acres of farmlands in Baramba and Narasinghpur areas of the district have been inundated due to the rise in water level of Mahanadi. Bhattarika temple which is situated in the banks of the river often gets submerged in case of a major flood in the river.

Speaking on the matter, a servitor of the temple said, “This is the season’s first flood in Mahanadi and the sacred waters of the river have symbolically offered ‘jalabhisekh’ on the Goddess.”