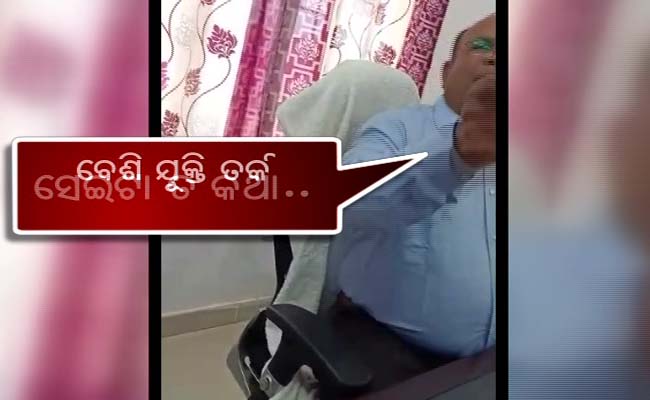 Nabarangpur: The tall claims of Odisha government on Mo Sarkar and call for transparency and no-corruption seem to have gone up in smoke in departments like road and transport where a few months ago, the government took a no-tolerance approach in crushing thousands of middlemen and agents on charges of looting people. A viral video of an RTO accepting to return bribe money taken from a job aspirant to provide him permanent employment is a glaring example of the situation.

As per reports, Nabarangpur RTO Ganeswar Kanhar had allegedly taken around Rs 45,000 in two instalments from a job aspirant, Akash Harijan of Badkumuli village with assurances to provide him permanent job, however the official reportedly did not fulfil his promises.

When Akash went to enquire the delay behind his employment and demanded him to return the money back, the RTO seemed to be careless. In a video of the encounter between the RTO and Akash, the official was caught purportedly accepting that he had taken Rs 30,000 from him and showed how he was asking another staff of the office to settle the score with Akash by returning him Rs 15,000.

Soon after the video of the incident went viral on social media, the district Congress issued a warning to hit streets while demanding immediate arrest of the RTO.

“The RTO had taken bribe from me to provide him some of permanent job but neither did he ensure him any kind of employment not returned the money. This is not an isolated incident as there have been such instances of illegal financial dealings to clear works in the RTO and everyone knows about it,” said the complainant.

While the RTO is yet to comment anything on the matter, the district Congress has demanded the State government to take stringent action against the official. “If it does not happen, we will launch a major strike in the first week of March,” said Nabarangpur district Congress president Muna Tripathy.

A Win-Win For All, Digitalisation Of Cinema Has Brought Realism: Ali Fazal