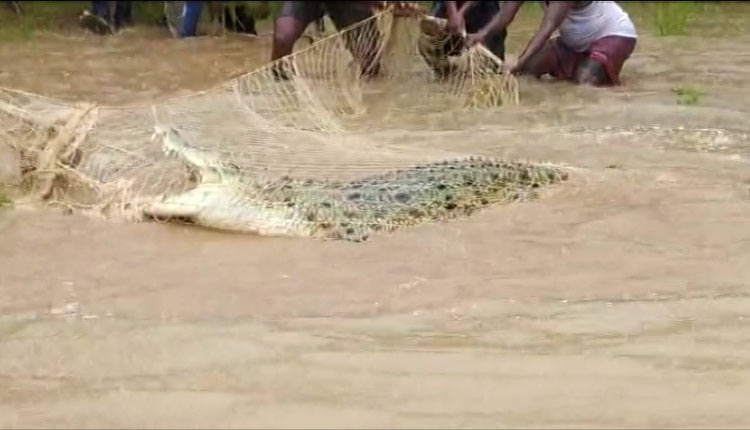 Kendrapara: A huge saltwater crocodile was trapped by villagers of Indupur in Kendrapara district when it was out preying in the Birupa river.

Locals alleged that the crocodile has injured and killed many animals including buffalos and pigs in the last four years.

The matter came to fore after a pig went missing near the Birupa Riverbank on Monday. The owner of the swine launched a frantic search and found its body floating in the river. However, after spotting a crocodile swimming nearby the pig’s carcass, he raised an alarm and locals got together to capture the reptile.

The locals including the owner of the pig reportedly devised a plan to capture the crocodile after it gave them a slip on Monday. A small portion near the river bank was cordoned off and the floating carcass of the pig was tied there as bait.

Sources said the unsuspecting crocodile got trapped in the nets after it ventured into the river bank to prey on the pig carcass.

The giant reptile which was caught by the villagers was later rescued by the Forest department officials of Kendrapara and Rajnagar.

Earlier on July 27, a 16-year-old boy of Parimukundapur village under Rajkanika Police Limits in the district was reportedly killed in a crocodile attack.

Doctor Kills Around 100 People And Threw Body To Feed Crocodile