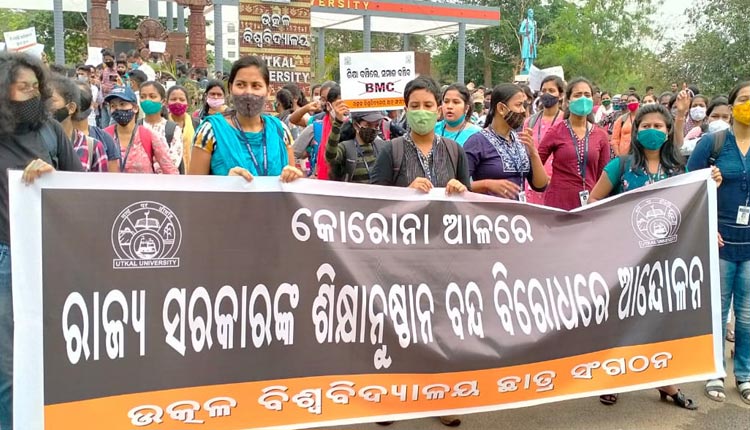 Bhubaneswar: Hundreds of students of Utkal University blocked National Highway-16 near Vani Vihar Square on Friday morning protesting the decision of the Bhubaneswar Municipal Corporation (BMC) to close the hostels of government and private educational institutions amid the steep rise in Covid-19 cases in the Capital City.

The BMC on Thursday had issued an advisory for the government and the residential educational institution authorities directing students to vacate hostels and go back to their homes.

Following this, the Utkal University authorities held a meeting yesterday and asked the boarders of PG fourth semester, whose examinations are over, to vacate the hostels by 12 April.

Similarly, the PG first semester boarders have been asked to leave the hostels immediately after the completion of their mid semester examination, not later than 16 April.

However, the varsity has allowed the M.Phil final semester students, PhD scholars and PDFs to stay in the hostels provided with a recommendation of their guides and respective head of the departments to carry out dissertation and research work.

The University has also decided to close the hostel mess from 17 April. However, the mess of research scholar hostels will remain open till further notice. The boards have been asked to take their belongings to facilitate renovation work at the hostels.

Sloganeering against the alleged unilateral decision of the BMC, the students locked the main gate of the university and held demonstration. The students also sat on the middle of the road on Vani Vihar Square affecting traffic movement severely on the route.

“Instead of closing the hostels, the State Government should take steps to prevent the outbreak of Covid-19 infection in the hostels. We want educational institutes and hostels to remain open. BMC’s decision has put our studies and career at stake,” said a final year PG student of the varsity.

“This is an unfair decision. We are being deprived of education. We are preparing for Ph.D, NET and other competitive exams. What will we do at homes, let us live in hostel. We will strictly adhere to all the Covid-19 protocols,” stated another protesting student.

Another agitating student questioned, “Thousands of people are participating in Pipili poll campaign. Coronavirus won’t spread there but it will infect students in university. What kind of decision is this?”