"ISKCON reaffirms its reverence and respect for traditions and practices of Puri".. 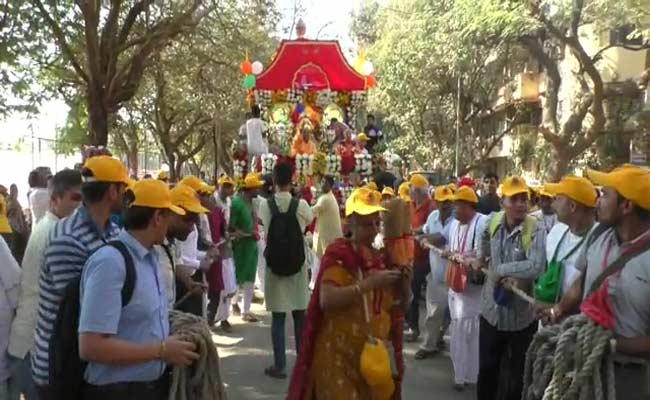 Bhubaneswar/New Delhi: With flames of protest erupting in Odisha over the untimely Rath Yatra organised by International Society for Krishna Consciousness (ISKCON) on the occasion of Basant Panchami in Mumbai, Yudhistir Govinda Das, national director of communications, ISKCON (New Delhi) has finally released a statement mentioning that the chariot fest of the Holy Trinity is being observed as per the scriptures.

“Gajapati Maharaja Dibyasingha Deb in November 2019 had suggested that we could observe Rath Yatra in the 12 days between Gundicha and Bahuda Yatra. Since ISKCON has been organising the fest for the last five decades, it will take some time for transition,” said Das.

Detailing on the national meeting in November last year, Das informed that at the request of Gajapati Maharaja, ISKCON had resolved to move the Rath Yatra festivals that it celebrates across the country to coincide with the 12-day Rath Yatra period in Asadha month.

“We would like to let the public know that late last year, ISKCON was contacted by the representatives of Gajapati Maharaja regarding their concerns about the Rath Yatra dates. ISKCON’s leadership took immediate steps to address their concerns and entered into a dialogue with the stakeholders. Two meetings were held in Bhubaneshwar which was chaired by the Gajapati Maharaja and was cordial in nature. Both sides presented their viewpoints on the topic. Due to the vast activities of ISKCON, Gajapati Maharaja kindly suggested that we could also observe the Rath Yatra in the 12 days between the Gundicha and Bahuda Rath Yatra. We also presented the scriptural injunctions given in Skanda Purana which allows Rath Yatra festival on two other dates. Since these festivals are happening for the last 50 years, it will take some time for transition.” said Yudhistir Das.

“Respecting the concerns of Gajapati Maharaja, ISKCON’s Governing Council at its November 2019 meeting passed a resolution to observe Rath Yatra festival pan-India only during the 12 days between Gundicha and Bahuda Rath Yatra. ISKCON is in dialogue with the concerned people regarding the scriptural provisions given in the Skanda Purana, Vaisnava-khanda, Puruṣottama-kshetra-mahatmya, 29.30–32, where Lord Jagannath recommends three dates for his Rath Yatra festival, i.e, Vasanta Panchami, Ashoka Ashtami and Ashada Shukla Dvitiya.,” added Das.

Due to the pioneering work of Srila Bhaktivedanta Swami Prabhupada (Founder-Acharya of ISKCON), millions of people have dedicated their lives for the service of Lord Jagannath. ISKCON has been organizing the Rath Yatra festival for the last fifty years all around the world. ISKCON reaffirms and wishes to state unequivocally that it has the highest regard and respect for the traditional practices for Rath Yatra and the sevayats in Puri’s Jagannath temple. ISKCON’s devotion and dedication to Lord Jagannath is witnessed globally from Australia to Russia where it has established hundreds of temples to spread his glories and attract pilgrims from all over the world to Sri Jagannath Puri. Thousands of devotees regardless of nationality, gender, caste participate in these festivals to remember and glorify Lord Jagannath. – Regional Secretary, ISKCON in Odisha.

The society also welcomed further dialogue on this matter so as to arrive at a resolution which helps everyone in spread the teachings and glories of Lord Jagannath unhindered.

Notably, ISKCON claims that this is the only global festival in which “the Lord himself is taken out of the temple to meet his devotees” and the Mumbai event is now ranked as the second-largest Lord Jagannath Rath Yatra in the world after Puri.