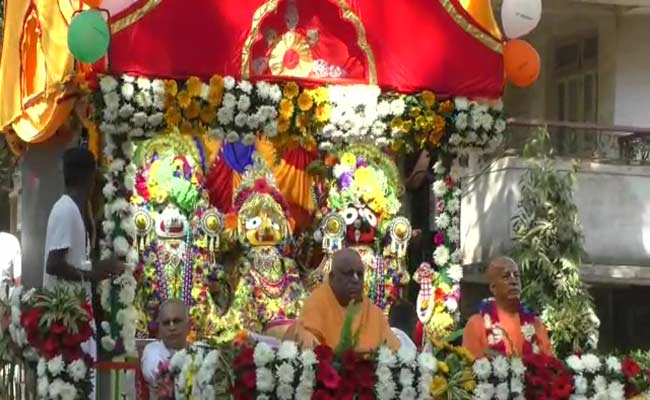 Bhubaneswar: With protests gaining ground in Odisha over the conduct of untimely Rath Yatra by the International Society for Krishna Consciousness (ISKCON) in Mumbai, State Culture and Tourism Minister Jyoti Prakash Panigrahi on Monday broke his silence on the issue.

Talking to reporters, Panigrahi clearly stated that the matter is in government’s notice and conduct of the untimely Rath Yatra by ISKCON is certainly an attack on Jagannath culture.

“The State government is aware of the matter. We will take appropriate legal action against them after prior consultation,” said Panigrahi.

They are not restricted to do such things outside the State/country. But, govt will take appropriate legal action against them for violating the traditions of Jagannath culture: #Odisha Tourism & Culture Minister Jyoti Prakash Panigrahi on ISKCON’s #UntimelyRathYatra in Mumbai pic.twitter.com/Tg4Prc4fSJ

Though the Minister did not reveal the next course of action, many including former Puri MLA Maheswar Mohanty openly demanded appropriate action against the ISKCON officials for repeatedly attempting to organise festivals in deviation to Puri Jagannath temple rituals.

“Nobody will appreciate if Rath Yatra is organised on a date other than the date on which it is conducted in Puri. Time has come to act on ISKCON for such deviation. Moreover, the ongoing protests against such move by ISKCON should be intensified,” said Mohanty.

When asked about why the Shree Jagannath Temple Administration (SJTA) has not taken any action, Mohanty said it is up to the administration but we will request the authorities to take appropriate action in connection with the incident.

It is pertinent to mention here that the ISKCON is now in the eye of a storm after it organised Rath Yatra on the occasion of Basant Panchami in Mumbai recently.

Several outfits including Jagannath Sena have lodged complaint against ISKCON at Puri Singhadwar Police Station for conducting Rath Yatra on a different date and hurting sentiments of millions of devotees in Odisha and outside.

Earlier, a complaint was also filed by the Sachetan Nagarika Mancha at Puri Singhadwar Police Station against organisers of the Rath Yatra in Mumbai.

What Will Ben Stokes Tell Virat Kohli On The Phone? Know Here