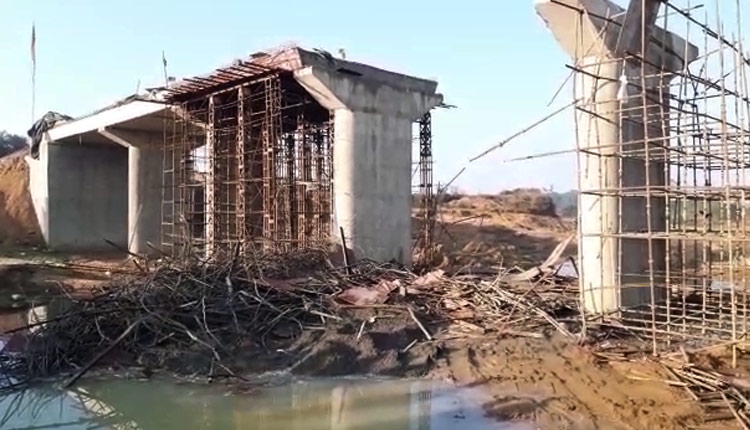 Umerkote: The Executive Engineer of Rural Works Division-II in Nabarangapur district, Santosh Kumar Samal was on Friday placed under suspension in connection with the collapse of an under-construction bridge earlier this month that claimed one life.

Samal has been suspended with immediate effect by the order of the Governor after being found guilty of negligence in duty in the inquiry report submitted by the engineer-in-chief and chief engineer (PMGSY), said an official notification issued by the rural development department.

“Santosh Kumar Samal, Executive Engineer, R.W. Division-II, Nabarangapur (Umarkote) has neglected his duties as reported by the EIC, R.W., Odisha, BBSR and Chief Engineer (PMGSY) after their inquiry on the collapse of one RCC slab of the Bridge over NAGI at 1st Km on Janiguda-Talapadar road in the District of Nabarangpur,” the notification stated.

A disciplinary proceeding against Samal is contemplated and therefore he will remain under suspension with immediate effect until further orders, the rural development notification added.

During the period of suspension, the headquarters of Samal is fixed at the office of the S.E., R.W. Circle, Sunabeda and he shall not leave the headquarters without prior permission of S.E. R.W. Circle. However, he is entitled to the payment of subsistence allowance in accordance with Rule 90 of the Odisha Service Code.

On January 10, a slab of the bridge over Nagi river suddenly caved in while some workers were leveling the upper surface of the structure. Mahendra Mali of Raighar village in Nabarangpur district had died on the spot while three other labourers had sustained critical injures.

Man From Odisha Held Captive For Ransom In Kolkata