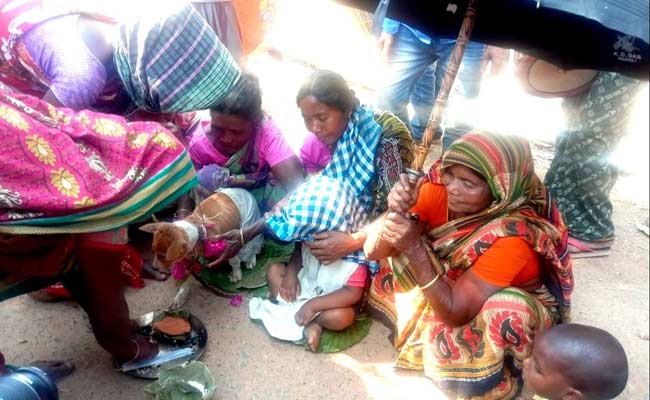 Baripada: Science and superstition continue to go hand-in-hand in most part of the country. A case in point is a recent report from Mayurbhanj district in Odisha where a toddler was reportedly ‘forced’ to marry a dog to ward off bad luck.

While many call it superstition, people of the tribal ‘Ho’ community cry tradition. The tribal community from Baria village in the district believes that the growth of maxillary teeth (teeth in the upper jaw) before mandibular teeth (teeth in the lower jaw) in a kid brings bad omen for the child and the entire family.

To ward off the bad luck, the Ho community organised a full-fledged wedding of the kid with a dog. The marriage ceremony was organised as per their traditional rituals followed by a reception party.

Such weddings are called ‘Seta Bapla’ in the Ho community.

Meanwhile, blind faiths continue to rule the roost in Odisha. One such instance of superstition had earlier came to the fore from the tribal-dominated Malkangiri district where a sorcerer was seen biting a woman to cure fever.

The sorcerer’s black magic was caught on a video footage shot by a bystander. In the video, which soon went viral, the sorcerer was seen performing rituals in the local language, apart from fanning and biting on different parts of the woman’s body to heal her fever.

On the other hand, incidents of hot iron branding of children to cure ‘stomach ailments’ in Keonjhar district continue to be a cause of major concern. The said blind belief has already claimed several lives in the district.