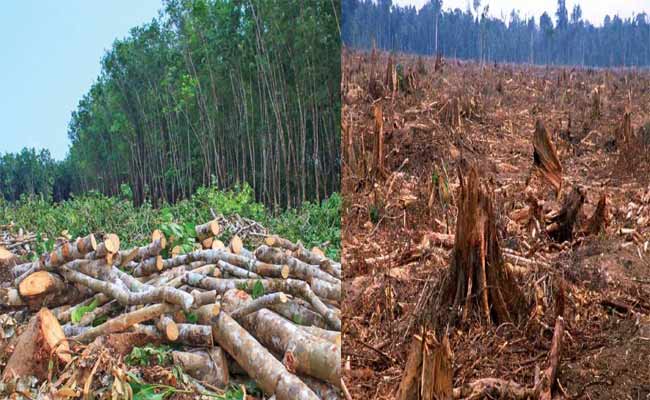 Bhubaneswar: On December 9 last year, villagers in Talabira were seething in anger as their thousands hopes felled in just one stroke. In contrary to the saying one who plants a tree, plants a hope, a massive 40,000 trees were felled at the Talabira village in Sambalpur district on December 9, 2019, to make way for a coal mine.

The big revelation here is a colossal 6.5 lakh trees have been mowed down in Odisha during the span of 2016 -19.

And the big shocker is Odisha topped the country in diversion of forest land for non-forestry purposes. In a short span of 3-years (2017-20),  a whopping 99.83 lakh hectares of forest land have been diverted for non-forest use in Odisha, reveals the data available with State Principal Chief Conservator of Forests.

Significantly, if Forest and Environment Minister Bikram Keshari Arukha’s reply to a question in State Assembly recently is taken into account, then since 2011-12 to 2018-19, Odisha has lost an eye-popping 12.27 lakh tress. This massive number shows the State on an average had lost nearly 1.5 lakh trees every year.

While the State Forest and Environment department brags about carrying out large scale compensatory afforestation activities in Odisha. Alas, the tragedy is since 2011-12 to till date, Odisha has completed plantation of mere 802 trees.

During the last decade, Odisha could plant 1.98 lakh trees only in the year of 2009-10. The data with State government shows not a single tree plantation was done thereafter, except in the year 2013-14.

As this is not enough, the most irritating revelation is a whopping 785.05 lakh hectares forest land in State are under encroachment.

A detailed look at the available data shows forests are fast losing out in Odisha predominantly to mining. Over the years, diversion of forest land for mining in State is over 60 per cent against the national average of 50 per cent. The second tree guzzler is: Thermal power units. The third culprit is road projects.

But the nagging fact is Odisha government puts up a pallid show in compensating the loss of forests. The conservation measures in the reclaimed forest lands of around 79,000 ha is quite laggard, despite it being mandatory under the Forest Conservation Act 1980.

The compensatory afforestation is also not simply matching up to the forest loss every year. Even, Justice Shah Commission report on illegal mining in State had expressed deep concern over negligent afforestation programmes in the reclaimed areas in the mine-rich regions. Still, the State government looks very lethargic. The CAMPA projects need to be covered under CM Naveen Patnaik’s pet 5T programme, so that an actual ‘transformation’ can be brought about.

The noteworthy fact is Odisha has been allocated the country highest CAMPA fund worth Rs 5,933.98 crores.