Tension In Nayagarh After Fuel Station Dispenses Water Instead Of Petrol 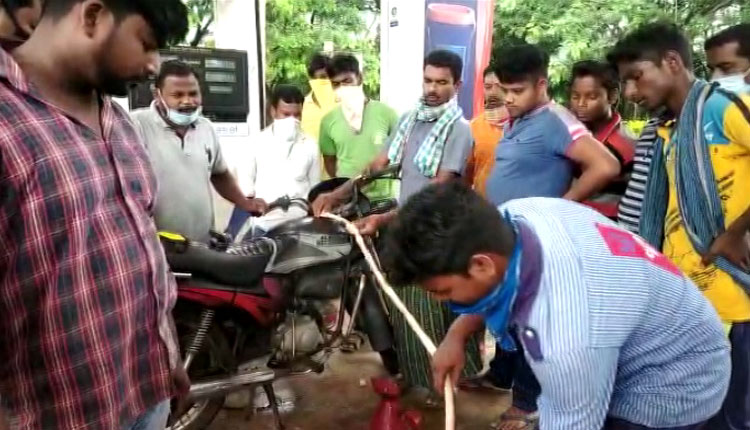 Nayagarh: Tension ran high at a fuel station in Sikharpur under Saranakul police limits of the district after a customer levelled allegations of adulteration of petrol on Friday.

According to sources, the complainant Antaryami Nayak filled petrol in his two-wheeler from the fuel station last evening. But when his vehicle didn’t start, he checked and found that a snag has developed allegedly due to mixing of water in petrol.

“I filled my tank and paid them Rs 1060. When I checked the fuel tank of my bike, I found water was mixed with petrol. Immediately around hundred people gathered at the spot and police was also informed about the same. When the cops drained the fuel out of the tank, they also suspected that water has been mixed. This morning, officials of Supplies department along with sales department staff reached here for an inspection, only to find that it was actually water,” said Nayak.

“In around 500 ml sample that was collected, the amount of petrol was 50 ml and rest 450 ml was water, as visible through the naked eye. We have collected the samples and sent it to the lab for test and reports will be submitted after that,” informed Jayanta Dash, Supplies Officer.

Centre Ready To Waive “Interest On Interest” During Moratorium