Bhubaneswar: The Managing Director (MD), OTV Jagi Mangat Panda on Saturday said that the leading channel in the State is being harassed with false cases as part of a conspiracy orchestrated at the behest of the 21-year-old ruling BJD government in Odisha because of Chief Minister Naveen Patnaik’s personal vendetta.

Panda’s statement came in the backdrop of the quashing of a petition filed by the Odisha Infratech Private Ltd (OIPL), of which Panda is one of the promoters, in the Orissa High Court over the Sarua land issue.

Amid the motivated and biased action by the Odisha police at the behest of the ruling dispensation, Panda has called for investigation into all allegations by a neutral national agency in the interest of propriety and fairness.

“Due to such biased behaviour of the Odisha authorities, it is high time that these allegations are investigated by a neutral national agency,” said Panda.

In the past two months a series of 20 false cases have been registered against OTV, it sister companies, employees and family members of Panda, including her 84-year-old father.

These false cases run a gamut of criminal allegations, which runs entirely counter to OTV’s impeccable 23 year long track record of ethics and propriety, she said.

“We vehemently deny these allegations. There has been no wrongdoing by us and we are confident that this will ultimately be proved in the courts. We assert that these cases are being orchestrated by the 21-year-old BJD government in Odisha, because of CM Naveen Patnaik’s personal vendetta against us,” said Panda in the statement.

Panda said that the channel will continue to seek redressal in the courts against continued harassment by the Odisha authorities. “Nevertheless, of course we will continue to cooperate with the state authorities on all these cases and allegations,” she added.

While exhorting the national media to maintain fairness in their coverage, Panda said, “We appeal to the national media to cover the full facts of these issues, and not just the allegations and developments from one perspective which suits the BJD. We assert that OTV has an impeccable track record of 23 years, and we have full faith in the judicial system,” she said.

“It is no secret that ever since my husband Jay Panda started speaking out about the BJD’s widespread corruption five years ago, and thereafter joined the BJP, the Odisha government and BJD have been targeting and harassing our family members and organisations and entities connected with us, as well as actual violence against us on several locations,” she said.

On top of this, she said, has been the BJD’s anger against OTV for repeatedly exposing widespread corruption in Odisha, including recent massive corruption from Covid funds.

“The recent harassment against us has included the arrest of five employees, of which two were intimidated and compelled to resign while in custody,” she said.

“We have been cooperating with the authorities, & large numbers of our employees have been going to police stations for interrogation as and when summoned, despite which the harassment continues, including arresting our people in the middle of the night for no good reason,” she added.

“This particular case in the High Court was filed to quash the case against one such arrested employee, wherein the court had granted bail to the promoters instead. In the meantime, the said employee has resigned, following which he was granted bail, & now the court has dismissed the case,” she added. 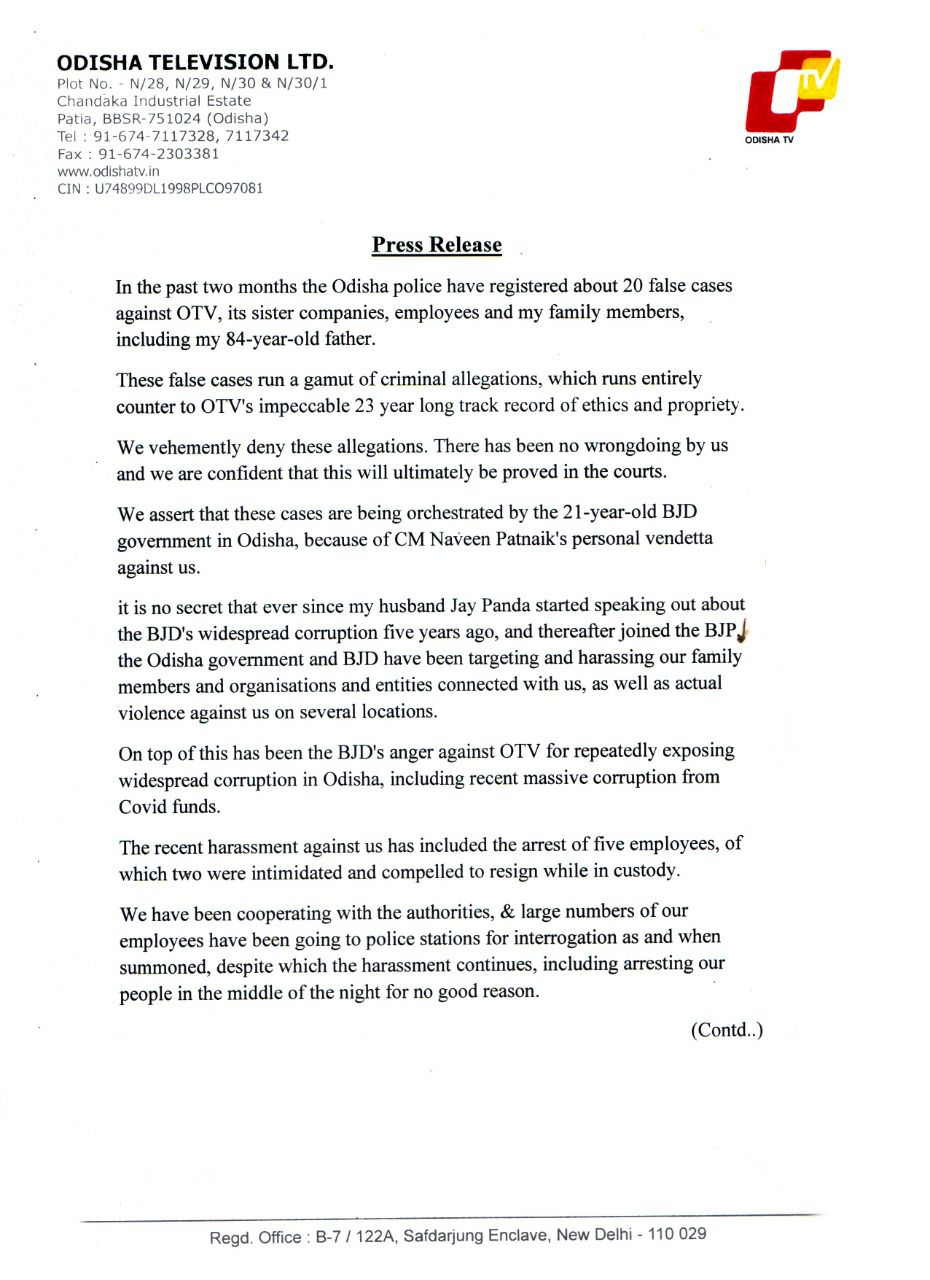 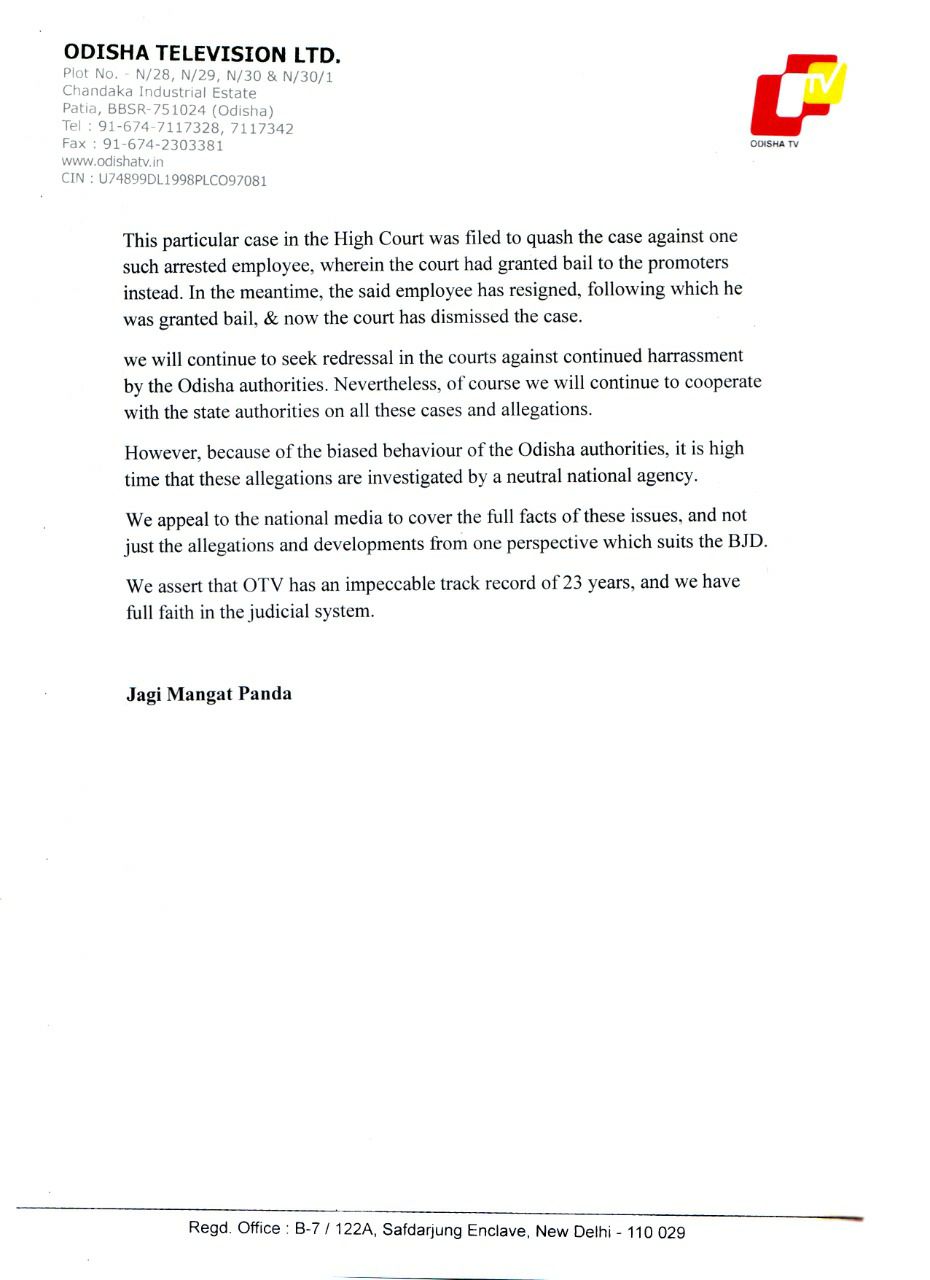