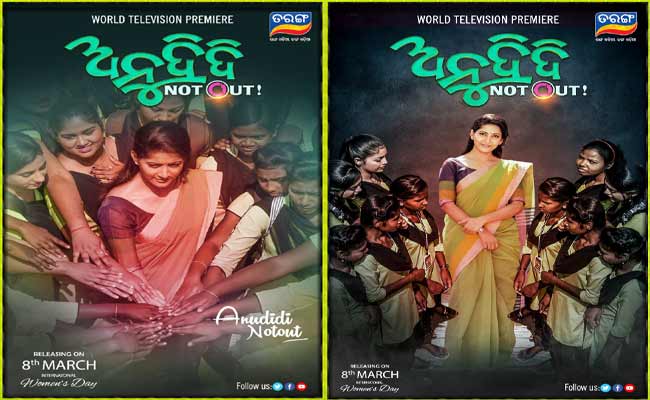 Bhubaneswar: Close on the heels of the massive success of its first web series ‘Chumbak- A Love Beyond’, Tarang Cine Productions is all set to release ‘Anu Didi Not Out’ on International Women’s Day tomorrow.

The world television premiere of the movie will be aired on Tarang Channel at 6.30 PM tomorrow. It will also be available on Tarang Plus app.

Directed by Tapas Sargharia, ‘Anu Didi Not Out’ revolves around the social issues that women, mostly girls living in rural areas face while advocating for women equality and empowerment.

While Ollywood actress Anu Choudhary will be seen in a lead role, Aman and Tanushree will share the screen with her as lead star casts.

Anu is playing the character of a teacher in a women’s college and will be seen encouraging the girl students to stand for their rights and choose their path independently.

The movie showcases the girls of the village breaking the societal barriers, raising their voice against exploitation and leading their way to success.

The film has been shot in remote areas of Mayurbhanj district and Bhubaneswar. Subhendu Sahu is the Executive Director of the movie and the music has been composed by Anil Kumar.