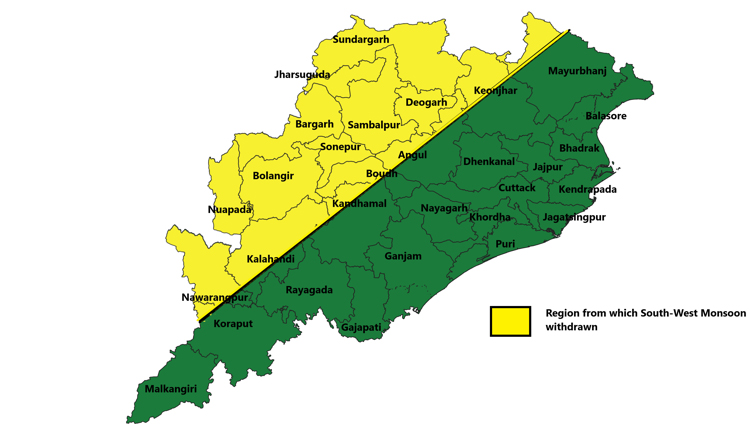 Bhubaneswar: The Meteorological Centre, Bhubaneswar on Monday informed that the southwest monsoon has withdrawn from interior and central-western districts of Odisha.

The monsoon has now withdrawn from the districts including Sundergarh, Jharsuguda, Deogarh, Sambalpur, Bargarh, Subarnapur, Bolangir and Nuapada. Other than these, the some parts of Mayurbhanj , Keonjhar, Angul, Boudh, Kandhamal , Kalahandi , Nabarangpur and Koraput districts of interior Odisha have also bid goodbye to the yearly rain-bearing winds.

South-West Monsoon withdraws from various districts of interior #Odisha. Conditions becoming favorable for its further withdrawal from the rest of the State during the next 48 hours.

As per the weatherman, conditions are becoming favorable for further withdrawal of Southwest Monsoon from rest parts of Odisha during next 48 hours and also from entire country around October 28.