Odisha forest fire-fighting system goes kaput. Fire incidences in State rose by 127 per cent during a span of 13-years against a drop of 48 per cent in Mizoram. This is so when least prone forest areas in Mizo is 1.64 per cent vis-a-vis 56 per cent in Odisha 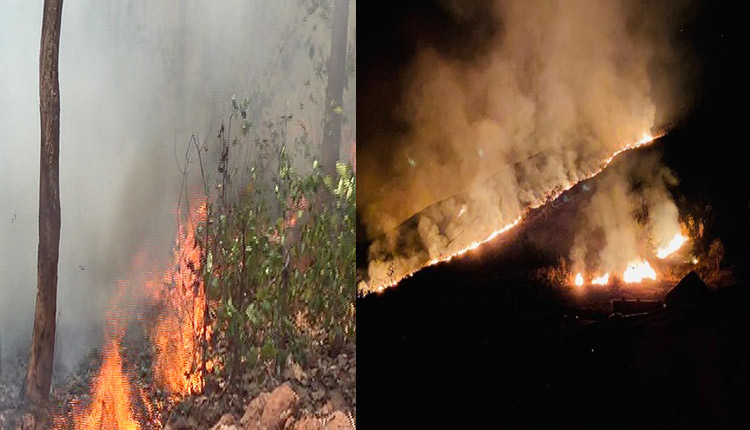 Bhubaneswar: The Simlipal Reserve Forest in Odisha burning red for over a week has made the State’s fire management plan go up in smoke. The big howler here for the State is despite not in the top-10 states having the maximum vulnerability to forest fires, Odisha has the dubious distinction of topping the country in forest fires.

Though the forest inferno timeline in Odisha starts from February third week, data with the Forest Survey of India reveals that with a whopping 11,717 fire alerts, Odisha topped the country during the period November 2020 – March 1, 2021.

2021 WILDFIRE IN ODISHA IN GRAPHS

BIG ALERT: The maximum day time temperature in the Simlipal forests will rise to 34 deg C on March 9 from the current level of 30 deg C.

Moreover, the wind velocity is all set to rise to 15kmph on March 5 from 12 kmph today.

The rise in temperature and wind velocity may prove a double whammy for the raging inferno in the reserve forest.

“Simlipal has deciduous(leaves shedding) trees where shedding takes place in the fall season (Autumn-Winter). This year the dry season (means no rainfall) extended from November to February. So, when such conditions have made the forest area virtually sit on the tinderbox, a preliminary study hints at the human reason behind triggering the fire. Though the fire alerts were issued by the FSI, lack of a prompt fire-fighting plan on the ground defeats the purpose leading to the fire turning wild,” observed a high-ranking forest official who visited the zone today.

Significantly, he further added that Odisha has to take a leaf out of Mizo’s fire-fighting strategy.

Odisha Seals Border With Chhattisgarh Amid Surge In COVID-19 Cases

A comparative analysis of the forest fire management between Mizoram and Odisha bares it all.

The data available till 2018 shows when Mizoram had a total fire counts of  2,339 when the total incidences of forest fires in Odisha were at 3,735.

The above factual data shows that forest fire incidences in Odisha had risen by a massive 127 per cent during a span of 13-years. In contrast, Mizoram saw a drop of 48 per cent.

Now Contrast The Area of Vulnerability

Odisha has over 56 per cent of its forest areas that are less prone to forest fires. But the all-important number in Mizoram stood at a mere 1.64 per cent.

When Odisha topped the country for getting maximum fire alerts by the Forest Survey of India, Mizoram doesn’t even figure among the top-5 in the country.

HOW MIZORAM ACHIEVED THIS OUTCOME?

The State government there had then taken a series of measures that are listed below.

THE BOTTOMLINE: Significantly, such a proactive fight against forest fires is yet to be seen in Odisha. For which, Asia’s second-largest biosphere reserve – the Simlipal National Park – is now in flames for over a week.

Odisha Seals Border With Chhattisgarh Amid Surge In COVID-19 Cases

Odisha Seals Border With Chhattisgarh Amid Surge In COVID-19…