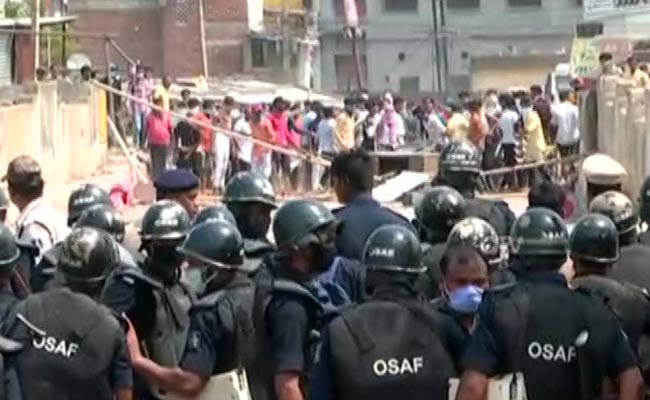 Rourkela: Palpable tension prevailed at the Steel city today after a scuffle broke out between locals and police personnel in Rourkela reportedly over demands to lift the containment orders imposed in several areas.

On April 26, the Rourkela Municipal Corporation (RMC) had marked some areas of the city as containment and buffer zones after detection of COVID positive cases.

Though the administration lifted certain restrictions in the buffer zones from Mangal Bhawan to Janta Nivas along the Power House Road and from Madhusudhan Marg to Anand Bhawan Lane on Monday night, it is said that some areas have been indicated as ‘re-carved contaminated zone’ till further orders.

Protesting this, the residents nearby Mahtab Road staged a road blockade this morning by burning tyres and when police arrived, they resorted to stone pelting, leaving more than 15 cops injured. After a clash erupted, police fired tear gas to disperse the mob. A few locals also protested near Plant site police station, reports said.

Even though the ACP, DIG and other senior officials rushed to the spot to pacify the irate locals, situation remained unchanged. Later, 5 platoons of police force were deployed at the spot to avoid any untoward incident.

As per RMC, “The areas out of the previously declared containment zone, except those marked as ‘re-carved containment zones’, are hereby declared as free from restrictions imposed through the containment order. However, the lockdown terms and conditions in the above areas will continue to remain in force and shall be guided as per guidelines issued by the State Government from time to time.”

Besides, it is also stated that only vehicles with prior pass/ permission will be allowed for movement in the zones. In order to restrict public movement, police has put up 10 barricades at different places along the road.