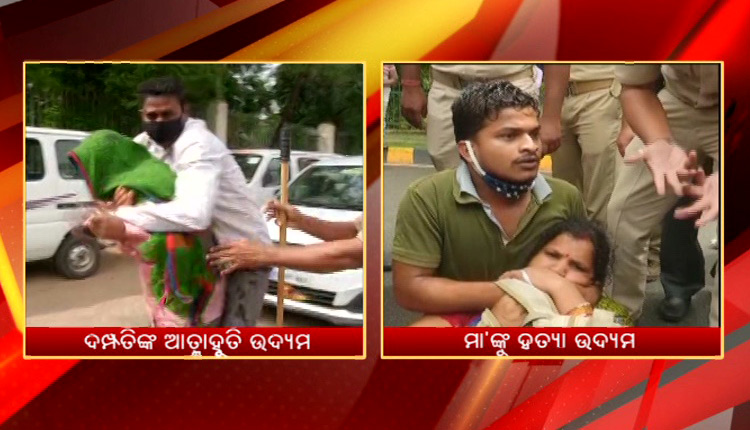 Bhubaneswar: The security cover of Odisha Legislative Assembly has once again come under public scrutiny after high-drama ensued in front of the Assembly main gate due to self-immolation bid by a couple on Tuesday.

A couple from Nayagarh, Ashok Sahu and Soudamini Sahu tried to set themselves on fire by pouring diesel on their body while protesting the State government’s inaction over the alleged kidnap and murder of their five-year-old daughter three months back.

The couple alleged that their daughter was kidnapped three months ago and though, they had to run from pillar to post seeking help to trace their daughter, neither the police, nor did other administrative officials lent an ear to their pleas.

Later, even though the police registered a murder case, after the body of their daughter was found few meters away from their house, no efforts were made to nab the miscreants involved in the gruesome murder, they alleged.

Bhubaneswar DCP Uma Shankar Das said, “An auto-rickshaw came from AG square and a couple disembarked from the vehicle in front of the main gate of Odisha Assembly. Suspecting something fishy, our officer present there approached them and overpowered them before they could set themselves on fire.”

Captain Dibya Shankar Mishra, the Minister of State for Home Affairs in Odisha said, “The couple were apprehended before they could inflict any damage on themselves. They were immediately taken to the hospital where the doctors are examining them.”

On October 1 this year, a youth who also hailed from Nayagarh, held a woman hostage at knifepoint in front of the Odisha Assembly, exposing the much-hyped “three-layered” security arrangements put by Commissionerate Police around the Assembly.

However, he was overpowered by security personnel and the cops following an intense scuffle that lasted for several minutes at the spot.

Repeated incidents of breach of Assembly security during sessions have now raised questions on the security arrangements of the police.