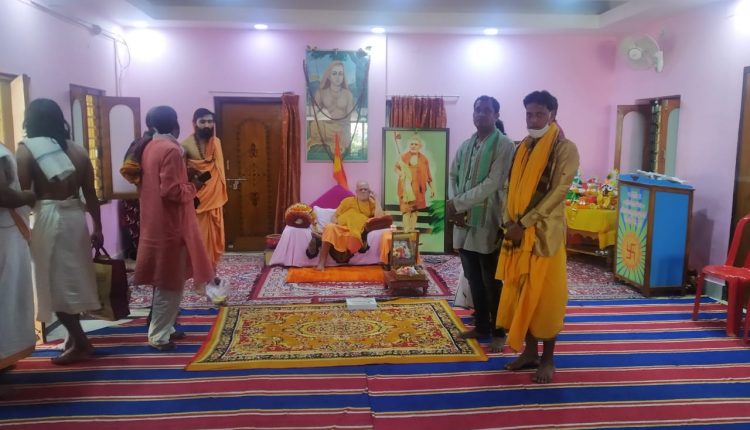 Puri: Members of the servitors’ association on Monday met the Sankaracharya of Puri- Nischalananda Saraswati and sought his intervention over their demand to reopen temples across the State.

They said temples and mutts especially those coming under the Endowment Commission be allowed to reopen for devotees in adherence to the Covid-19 protocols.

The Sakhigopal temple, Dandamakundpur temple, Siruli Mahaveer, Alarnath and Maa Mangala temple in Kakatpur and Tarini temple in Ghatagaan and other famous shrines which witness a large footfall of devotees, should be taken into consideration, they added.

Taking the plea of the servitors seriously, the Puri seer has assured them to take the matter to the Endowment Commission.

“The servitors of Sri Jagannath Temple, Sakhigopal temple and others in the State are suffering due to closure of the temples as they have no other alternative for their livelihood. I urged the government to take care of them and their families and do alternate arrangements for their livelihood till the reopening of shrines”, the Sankaracharya said.

The servitors across the State have been pressing for reopening of temples by beating gongs and blowing conch shells.

They argued if all types of gatherings and meetings are allowed and liquor shops are permitted to run the business, so should the temples.

They said that their livelihood has been hit hard due to the closure of the shrines.

Sources said the temples in other States have been thrown open to public following Central government’s go-ahead while the Odisha government is yet to take a call on the demands of the priests.

Servitors who usually run their family with the donation they collect from the devotees are finding it hard to make their ends meet.

Earlier, the servitors of Puri temples had staged a dharna on the Bada Danda, demanding reopening of Jagannath temple and others across the State. They suggested the devotees be allowed to enter temple in adherence to Covid-19 norms.

Odisha: Remains Of Temple Found During Excavation In Bolangir