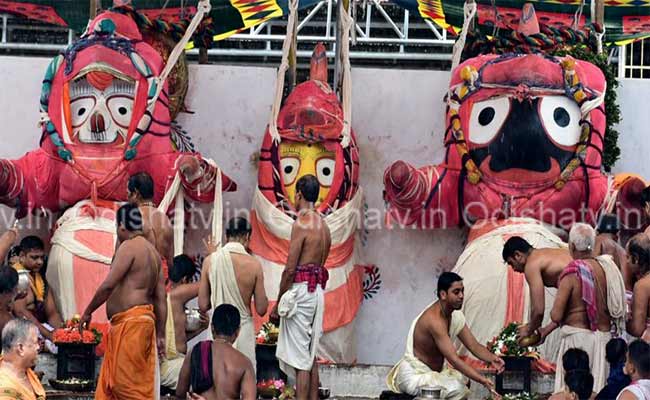 Puri: As the festival of chariots inches closer, the Shree Jagannath Temple Administration (SJTA) in Puri today held a review meeting with representatives of various Nijogs and other senior officials to discuss on the likelihood of the Snana Purnima on June 5 with minimum number of servitors.

Chief administrator of the SJTA, Krishan Kumar informed that the temple admin has sought a list of the servitors for participation in Snana Purnima of Lord Jagannath and His Siblings.

“The Snana Jatra will be performed with least number of participants, which is why we have asked the representatives of different Nijogs to submit a list of servitors’ names by May 25,” Kumar said.

“Based on the list, servitors will be permitted to participate in the rituals. However, we are yet to decide whether people should be allowed to witness the ceremony. Today’s meeting comprised of senior officials and representatives of 10 different Nijogs. We have had a discussion with Daitapati Nijog earlier. Next, we will have talks with the Chhatisa Nijog. A final decision would be taken at the managing committee meeting. Current restrictions don’t permit to conduct any ritual outside the temple premises. We will wait till May 31 so that appropriate decision is taken based on the new set of guidelines,” added the SJTA chief.

Representatives of different nijogs have been asked to submit lists of servitors by May 25 so that #SnanaYatra rituals of Lord Jagannath can be performed with least number of participants keeping in view #COVID19 crisis: SJTA Chief Administrator Krishan Kumar #RathYatra pic.twitter.com/qeHjgwxta4

“We had a discussion with the Daitapati Nijog and then an orientation session on COVID-19 was held. There is another session with Garabadu Nijog on 23rd May. By then, a decision will be taken of whether they will be sent to institutional quarantine or put in home quarantine. Every servitor is ready to make sacrifices so that the festival is organised smoothly. The restrictions with which Rath construction is underway will set an example for the Snana Jatra as well,” said Puri Collector Balwant Singh.

On the progress of chariot construction, the Collector said, “So far, all samples taken from Maharana servitors for Covid-19 testing have been found to be negative. Compliance of social distancing and other norms has helped a lot. We hope that chariot construction for Rath Yatra will conclude on time.”

“The idea is to carry out all rituals of Snana Purnima with participation of a minimum number of servitors. The ones chosen would be given special passes which will facilitate their entry,” stated Rajat Kumar Patihari, Secretary of the Garabadu Nijog.

Amazon Food Launched In India, Set To Give Tough Competition To Zomato, Swiggy