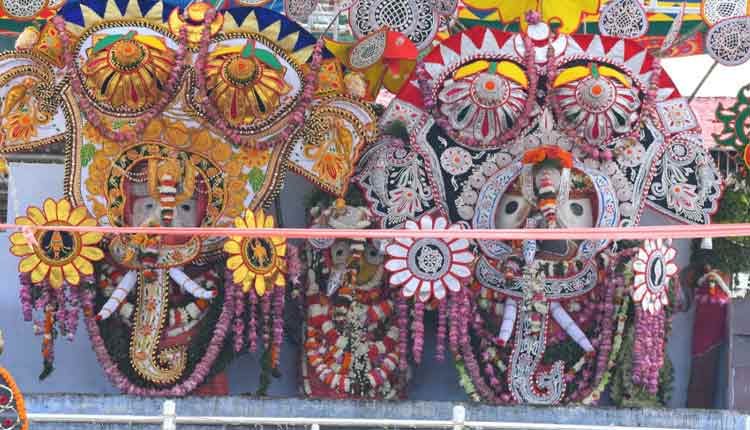 Puri: Ahead of the annual Rath Yatra, Lord Jagannath and his siblings- Lord Balabhadra and Goddess Subhadra along with Chakraraj Sudarsan gave darshan to devotees in the mesmerizing ‘Hati Besha’ on the occasion of auspicious Snana Purnima on Friday.

It was a grand spectacle for devotees as it is one of the beautiful and the foremost tradition associated with the presiding deities of Puri Jagannath temple especially the cycle of numerous festivals.

The tradition of decking up Holy Trinity in ‘Gajanana or Hati Besha’ after the ceremonial bath can be traced to the popular Hindu belief of invoking Lord Ganesh before any religious or auspicious event.

Usually the artisans and servitors begin the preparation for the elegant Hati Besha of Lord Jagannath and his elder brother Balabhadra much in advance. All the articles for the unique besha attire are traditionally prepared by the artisans at Raghaba Das Mutt and Gopal Tirtha Mutt.

The Puspalak and Dutta Mohapatra servitors usually carry out the service of adorning the deities with the Hati Besha.

Year-long cycle of festivals at Puri Srimandir begins from the #SnanaPurnima, the birthday of Lord Jagannath.

As a custom, Kalia Thakura & his sibling deities adorn Hati Besha as per a belief that every Hindu religious rite begins with worship of Lord Ganesh#RathYatra pic.twitter.com/b7qxYIwgQr

Prior to the Hati Besha, elaborate measures were undertaken by the Puri Jagannath Temple administration for the conduct of Snana Purnima rituals in which the presiding deities were given a royal bath following early morning rituals today.

In the absence of Puri Gajapati Maharaj Dibyasingha Deb, Mudiratha (representative) conducted ‘Chhera Panhara’ at the Snana Mandap after the deities were given the ceremonial bath with 108 pots filled with aromatic water today. All the rituals were performed by servitors as per previous fixed timings of SJTA.

#Watch Mudirasta (the representative of Puri Gajapati) performing ‘Chhera Panhara’ ritual on Snana Bedi in the absence of the latter.

“I decided to stay home (Sri Nahar) today only in compliance with government’s COVID lockdown guidelines which prohibits religious functions and congregations of moe than 7 persons outside the temple and prohibits persons over 65 years of age from venturing out of their homes,” said Gajapati Maharaj.

“This is the second time during my tenure when I have been unable to perform service to the Lords on Snana Jatra. The first time was in 1976 when I was in USA for my LLM programme at Northwestern University, Chicago. It is a well established tradition that Mudiratha performs all Seba before the Lords when Gajapati Maharaja is absent,” he added.